McDonald's (MCD) Outpaces Industry in the Past Year: Here's Why

Shares of McDonald's Corporation (MCD - Free Report) have gained 5% in the past year, against the industry’s decline of 18.9%. Loyalty program, digitalization, robust comps growth and expansion efforts have been driving the company’s performance. However, dismal performance in China remains a concern. Let’s delve deeper.

McDonald’s believes that there is a huge opportunity to grow all its brands globally by expanding its presence in existing markets and entering new ones. Its expansion efforts continue to drive performance. Despite the pandemic, the company continues to strengthen its global footprint. It is planning to open more than 1,800 restaurants globally in 2022, which includes 500 openings in the United States and IOM segment and 1,300 (including nearly 800 in China) inaugurations in the IDL market. The company anticipates restaurant growth of nearly 3.5% for 2022.

The Zacks Rank #3 (Hold) company continues to impress investors with robust comps growth. In first-quarter 2022, global comps advanced 11.8% compared with a gain of 7.5% in the prior-year quarter. This marks the fifth consecutive quarter of comps growth. In the first quarter, comps at the United States, international operated markets and international developmental licensed segment rose 3.5%, 20.4% and 14.7%, respectively. Japan and Latin America posted robust comps growth. The company reported comps growth for the 26th straight quarter in Japan. 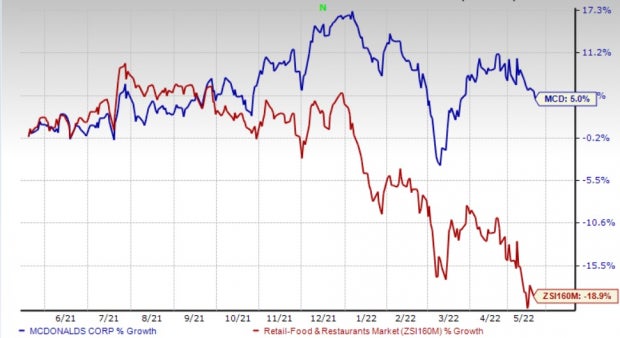 Although overall comps have increased sharply, it is still well below the pre-pandemic level in a few markets. In first-quarter 2022, comps in the China market were negative. Softening economy and COVID-related government restrictions have hampered comps in China.

BBQ Holdings carries a Zacks Rank #2 (Buy). BBQ Holdings has a long-term earnings growth of 14%. Shares of the company have increased 3.7% in the past year. You can see the complete list of today's Zacks #1 Rank (Strong Buy) stocks here.

The Zacks Consensus Estimate for BBQ Holdings' 2022 sales and EPS suggests growth of 40.9% and 66.2%, respectively, from the year-ago period's levels.

Jack in the Box carries a Zacks Rank #2. The company has a trailing four-quarter earnings surprise of 11.8%, on average. Shares of the company have declined g 31.5% in the past year.

The Zacks Consensus Estimate for JACK’s current-year sales growth of 5% from the year-ago period's levels.

Arcos Dorados flaunts a Zacks Rank #1. Arcos Dorados has a long-term earnings growth of 31.3%. Shares of the company have appreciated 16.5% in the past year.

The Zacks Consensus Estimate for Arcos Dorados' 2022 sales and EPS suggests growth of 16.6% and 66.7%, respectively, from the year-ago period's levels.