Horizon Therapeutics plc (HZNP - Free Report) announced that it has enrolled the first in a phase II study evaluating its anti-ILT7 human monoclonal antibody, daxdilimab (HZN-7734), for the treatment of people with moderate to severe alopecia areata.

The open-label, proof-of-concept study will investigate daxdilimab for the treatment of alopecia areata, an autoimmune disorder that results in non-scarring hair loss. The primary endpoint of the study is to see the percent change from baseline in Severity of Alopecia Tool or SALT score at week 24.

Per the company, in the United States, more than 600,000 people live with alopecia areata. Hence, if successfully developed and upon potential approval, daxdilimab might serve an area of large unmet medical need for the above-mentioned patient population.

Apart from alopecia areata, daxdilimab is also being developed for treating other autoimmune diseases.

Shares of Horizon have lost 13.8% in the year so far compared with the industry’s decline of 25%. 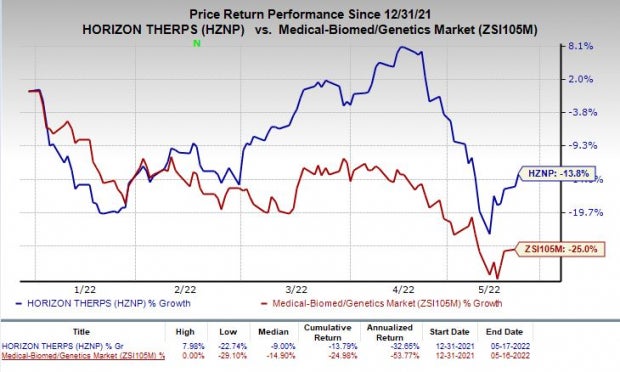 Horizon reports financial results under two segments — Orphan and Inflammation. The company’s portfolio of marketed drugs has been witnessing a solid uptake.

In the first quarter of 2022, the Orphan segment generated sales worth $834.4 million, significantly up on a year-over-year basis.

Sales in the Orphan segment are being driven by the strong uptake of Tepezza, as well as the continued growth of Krystexxa, Ravicti, Procysbi, Actimmune and Uplizna.

Earnings of Applied Therapeutics have surpassed estimates in one of the trailing four quarters, met the same once and missed the same on the other two occasions, delivering an earnings surprise of -0.67%, on average.

Earnings of Aeglea BioTherapeutics have surpassed estimates in two of the trailing four quarters and missed the same on the other two occasions, delivering an earnings surprise of 9.47%, on average.

Earnings of EyePoint Pharmaceuticals have surpassed estimates in one of the trailing four quarters and missed the same on the other three occasions, delivering an earnings surprise of -5.80%, on average.