The consolidated pretax profit margin came in at 7.5%. Excluding a 1.9 percentage point adverse impact from a charge associated with the write-down of the company’s minority investment in Familia, the adjusted consolidated pretax margin was 9.4%, up from 7.2% reported in the year-ago quarter. The upside can be attributed to the benefit of a reduction in pandemic-induced expenses and the annualization of international temporary store closures undertaken in the past year. The company’s pricing initiative and solid markon were also an upside. These upsides were somewhat offset by almost 2.2 percentage points of additional freight pressure and nearly 0.7 percentage points of incremental wage pressure.

The gross profit margin was 27.9%, down 0.2 percentage points. Selling, general and administrative (SG&A) costs as a percent of sales came in at 18.4%, down 2.1 percentage points from fiscal 2022’s level.

As of Apr 30, 2022, total inventories were $7 billion. Management is optimistic about its capabilities to provide fresh merchandise to its stores and online during the summer season.

On Mar 3, 2022, management unveiled that it is committed to offloading minority investment in Familia, an off-price retailer that runs in Russia. 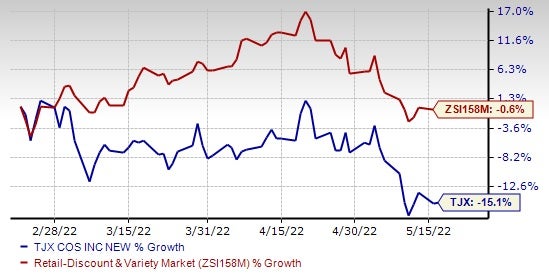 Shares of the Zacks Rank #4 (Sell) company have dropped 15.1% in the past three months compared with the industry’s decline of 0.6%.

Kroger, a renowned supermarket company, carries a Zacks Rank #2 (Buy). The company has an expected EPS growth rate of 9.9% for three to five years. You can see the complete list of today’s Zacks #1 Rank (Strong Buy) stocks here.

The Zacks Consensus Estimate for Kroger’s current financial-year sales suggests growth of 3.2% from the year-ago period. KR has a trailing four-quarter earnings surprise of 22.1%, on average.

Target, which operates as a general merchandise retailer, carries a Zacks Rank #2. The company has a trailing four-quarter earnings surprise of 21.3%, on average.

The Zacks Consensus Estimate for Target’s current financial-year sales suggests growth of 3.9% from the year-ago period. TGT has an expected EPS growth rate of 16.5% for three to five years.

Costco, the operator of membership warehouses, also holds a Zacks Rank #2. Costco has a trailing four-quarter earnings surprise of 13.3%, on average. The company has an expected EPS growth rate of 9.1% for three to five years.

Here's Why Investors Should Retain Hologic (HOLX) Stock for Now