Here's Why You Should Hold on to DexCom (DXCM) Stock Now

DexCom, Inc. (DXCM - Free Report) is well-poised for growth, backed by a robust product portfolio and a strong international presence. However, supply constraints remain a concern.

DexCom — with a market capitalization of $30.27 billion — is a medical device company focused on the design, development and commercialization of continuous glucose monitoring systems (CGM). It anticipates earnings to improve by 17.4% over the next five years. The company beat earnings estimates in two of the trailing four quarters and missed twice, the average surprise being 15.8%.

On the basis of business growth and expanding patient base, the extension of G7 into all the core markets might extend to 2022 as the company ramps up manufacturing to lend support to the markets in an efficient manner.

In April 2022, DexCom announced that the new Dexcom ONE CGM System would be introduced in the U.K. in May. This new system is an easy-to-use real-time CGM (rt-CGM) and is more accessible and affordable for people suffering from diabetes in the country. Presently, Dexcom ONE is in review to be added to drug tariffs throughout the U.K. regions. It is worth mentioning that Dexcom ONE will become part of the broad range of products offered by the company for people with diabetes in the U.K., including the Dexcom G6 CGM system and the upcoming Dexcom G7 CGM system. 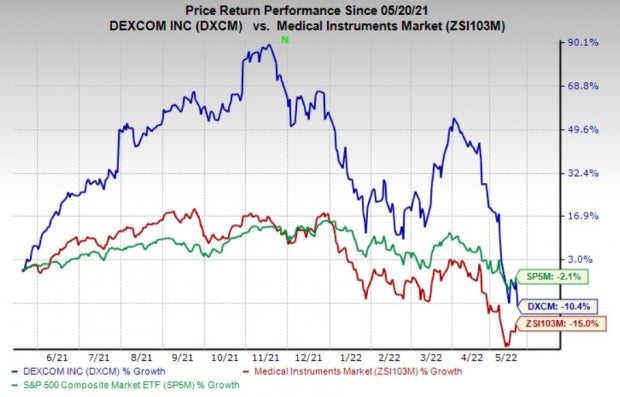 In March 2022, DexCom announced that the Ontario government would offer coverage for the Dexcom G6 CGM System effective Mar 14, 2022. The government is going to offer this coverage through its Assistive Devices Program (ADP) for people staying with type one diabetes in the province living and are over two years of age and fulfill the coverage criteria. It is worth mentioning that the back of the upper arm insertion site is for ages 18 and above. In the same month, the company received the FDA’s Breakthrough Device Designation for the Dexcom CGM System’s use in the hospital setting. The designation is expected to provide a more efficient and streamlined review pathway to enable Dexcom CGM technology to rapidly strengthen the company’s footprint in the hospital market.

DexCom relies on third parties for an assured steady supply of inputs. Consequently, the capacity constraint for the production of its offerings might dampen the company’s growth prospects.

The Zacks Consensus Estimate for 2022 revenues is pegged at $2.91 billion, suggesting growth of 18.8% from the year-ago reported number. The same for earnings stands at $3.28, indicating an improvement of 23.3% from the prior-year quarter.

AMN Healthcare surpassed earnings estimates in each of the trailing four quarters, the average surprise being 15.6%. The company currently sports a Zacks Rank #1 (Strong Buy). You can see the complete list of today’s Zacks #1 Rank stocks here.

AMN Healthcare’s long-term earnings growth rate is estimated at 1.1%. The company’s earnings yield of 11.4% compares favorably with the industry’s (0.8%).

Masimo beat earnings estimates in each of the trailing four quarters, the average surprise being 4.4%. The company currently carries a Zacks Rank #2 (Buy).

Masimo’s estimated earnings growth rate for second-quarter 2022 is pegged at 22.3%. The company’s earnings yield is pegged at 3.8% against the industry’s (8.5%).

Veeva Systems surpassed earnings estimates in each of the trailing four quarters, the average surprise being 9.6%. The company currently carries a Zacks Rank #2.

Veeva Systems’ long-term earnings growth rate is estimated at 18.1%. The company’s earnings yield of 2.4% compares favorably with the industry’s 0.2%.