Hasbro, Inc. (HAS - Free Report) is poised well for growth, backed by robust performance of its gaming category, strong product lineup, increased focus on eOne content and rapid growth in the emerging markets. However, high costs continue to hurt the company’s performance. Shares of the company have decreased 4.3%, compared with the industry’s decline of 16.2%. Let’s delve deeper.

Hasbro continues to invest in innovation. It partnered with Paramount to enhance storytelling and content capabilities. The company invested in Boulder Media — its animation studio — and increased digital capacities to drive sales.

Going forward, the company continues to focus on retailers to expand its online offerings. During first-quarter 2022, the Wizards of the Coast and Digital Gaming segment's revenues totaled $262.8 million, up 9% from $242.2 million reported in the year-ago quarter. The segment benefited from the robust performance of Magic: The Gathering and Dungeons & Dragons, as well as licensed digital gaming. Lately, the company's online and e-commerce partners have improved, and its mass partners have witnessed robust gains.

Hasbro continues to focus on adapting plans to deliver a robust lineup of entertainment and innovation from E1 and its partners. Going forward, the company intends to focus on a multi-year content roadmap led by eOne and a deep and innovative merchandise program to drive growth. In partnership with Paramount, the next feature in the theatrical TRANSFORMERS franchise is scheduled for June 2022, while Dungeons & Dragons live-action feature is scheduled to premiere in March 2023. Coming to the unscripted live-action, the company has nearly 40 active productions for Canada, the United States and the U.K.

The Zacks Rank #3 (Hold) company has been gaining from rapid growth in the emerging markets. The company seeks to grow its international business by expanding into emerging markets in Eastern Europe, Asia and Latin and South America. The emerging markets offer greater opportunities for revenue growth than the developed markets and have been contributing significantly to Hasbro's revenues, given its investments in advertising and other brand-building efforts. 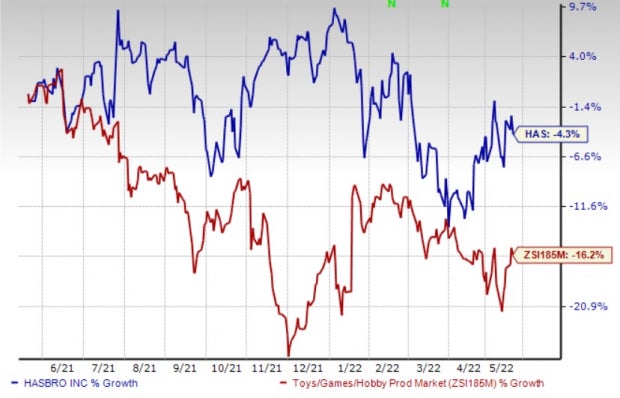 Hasbro's initiatives, including product launches and a shift toward more technology-driven toys for reviving its brands and boosting sales, are likely to drive profits in the long term. However, costs related to those initiatives might prove detrimental to the company in the near term. It has been shouldering high expenses with respect to freight and input for quite some time. The company anticipates the inflationary pressures to persist for the majority of 2022. During the fiscal first quarter, selling, distribution and administration expenses — as a percentage of net revenues — came in at 26.4% compared with 25.9% reported in the prior-year quarter.

Civeo sports a Zacks Rank #1 (Strong Buy) at present. The company has a trailing four-quarter earnings surprise of 1,565.1%, on average. Shares of the company have surged 58.3% in the past year. You can see the complete list of today’s Zacks #1 Rank stocks here.

The Zacks Consensus Estimate for CVEO’s 2022 sales and earnings per share (EPS) suggests growth of 12.5% and 1,450%, respectively, from the year-ago reported levels.

Bluegreen Vacations flaunts a Zacks Rank #1. BVH has a trailing four-quarter earnings surprise of 85.9%, on average. The stock has surged 25.3% in the past year.

The Zacks Consensus Estimate for BVH’s current financial year sales and EPS indicates growth of 11.2% and 35.1%, respectively, from the year-ago reported levels.

Funko carries a Zacks Rank #1. FNKO has a trailing four-quarter earnings surprise of 78.7%, on average. Shares of the company have declined 21.4% in the past year.

The Zacks Consensus Estimate for Funko’s current financial year sales and EPS suggests growth of 26.8% and 31%, respectively, from the year-ago reported levels.