The modification contract was awarded by the Air Force Life Cycle Management Center, Wright Patterson Air Force Base, OH. The deal involves the delivery of production sensors that address obsolete parts in the current sensor. The majority of work will be carried out in Rolling Meadows, IL.

The rising threat of missile attacks has been fueling the requirement for an effective infrared countermeasure that excels in providing spherical protection by detecting, tracking and jamming incoming infrared threats.

Countries globally have been reinforcing their military resources due to intense geopolitical tensions and amplified terrorist threats. In fact, the recent invasion of Ukraine by Russia alarmed countries worldwide to increase their defense spending to strengthen their national security systems. To this end, an effective large aircraft infrared countermeasure may witness a ramp-up in demand due to its anti-missile solution features that protect a country in case of any sudden assault.

Per a report from the Research and Markets firm, the global airborne countermeasure system market is projected to witness a CAGR of 5.2% through 2026. Such growth prospects may benefit Northrop Grumman as it remains one of the leading defense contractors to provide the capable and adaptable laser-based countermeasures system for the U.S. Air Force.

Lockheed Martin’s space based-infrared system uses infrared surveillance to provide an early missile warning for the U.S. military and is considered one of the nation’s highest-priority space programs. The system includes a combination of satellites and hosted payloads in Geosynchronous Earth Orbit and Highly Elliptical Orbit and ground hardware and software.

Lockheed Martin’s long-term earnings growth rate stands at 5.7%. LMT shares have returned 9.6% in the past year.

The long-term growth rate of BAE Systems is pegged at 5.3%. Shares of BAESY have returned 27.4% in the past year.

The long-term growth rate of L3 Harris is pegged at 4.4%. LHX shares have rallied 7.7% in the past year.

In the past year, shares of Northrop Grumman have rallied 20.6% against the industry’s decline of 40.5%. 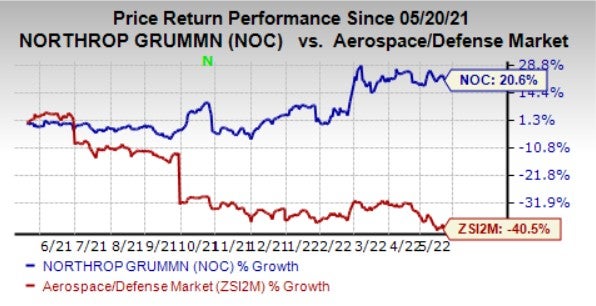