Reasons to Retain DaVita (DVA) Stock in Your Portfolio For Now

The renowned global comprehensive kidney care provider has a market capitalization of $8.92 billion. The company projects 10.6% growth for the next five years and expects to maintain its strong performance. DaVita’s earnings surpassed the Zacks Consensus Estimate in three of the trailing four quarters and missed the same in the other, the average surprise being 7.4%. 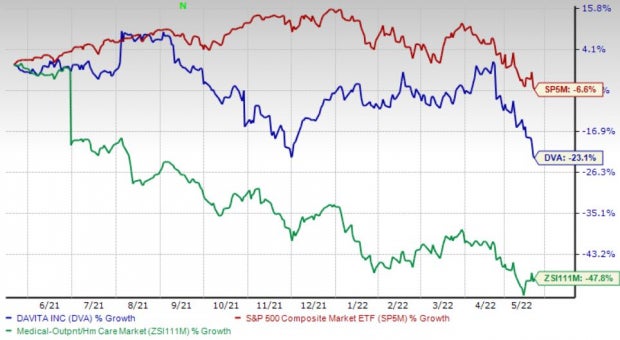 Strong Q1 Results: DaVita’s solid first-quarter 2022 results buoy optimism. The company registered improvement in dialysis patient service revenues during the first quarter of 2022. The acquisition of several dialysis centers and opening of others, both within the United States and overseas, are promising. DaVita’s partnership with various nephrologists is also encouraging. DaVita has been steadily expanding its foothold in international markets, thereby recording strong performances.

DaVita Kidney Care: We are optimistic about DaVita Kidney Care, the major revenue-generating segment of DaVita. It specializes in a broad array of dialysis services, thereby significantly contributing to the company's top line. DaVita’s dialysis patient service revenues registered year-over-year growth during the quarter. With respect to DaVita Integrated Kidney Care, the company had approximately 40,000 patients in risk-based integrated care arrangements, representing approximately $3.3 billion in annualized medical spending as of Mar 31, 2022. DaVita had an additional 8,000 patients in other integrated care arrangements.

Overseas Growth: DaVita is steadily expanding in the international markets. In the past few years, the company has strengthened its position in emerging and developing markets, which raises our optimism. During the quarter, DaVita saw solid revenue growth from international dialysis patient service and other.

Stiff Competition: DaVita, in its U.S. dialysis business, faces intense competition from large and medium-sized providers, among others. As the company and its competitors continue to grow dialysis centers and open new ones, DaVita may not be able to retain an adequate number of nephrologists to serve as medical directors (which is required as per U.S. regulations for each center). DaVita also competes with individual nephrologists who have opened their own dialysis units or facilities.

Integration Risks: DaVita’s business strategy includes growth through acquisitions of dialysis centers and other businesses, as well as entry into joint ventures (JVs). The company may engage in acquisitions, mergers, JVs or dispositions, or expand into new business models, which may affect its operational results.

DaVita is witnessing a negative estimate revision trend for 2022. In the past 90 days, the Zacks Consensus Estimate for its earnings has moved 3.7% south to $7.79.

The Zacks Consensus Estimate for the company’s second-quarter 2022 revenues is pegged at $2.93 billion, suggesting a 0.5% improvement from the year-ago quarter’s reported number.

Omnicell, flaunting a Zacks Rank #1 (Strong Buy) at present, has an estimated long-term growth rate of 16%. OMCL’s earnings surpassed estimates in three of the trailing four quarters, the average beat being 13.4%. You can see the complete list of today’s Zacks #1 Rank stocks here.

Patterson Companies has an estimated long-term growth rate of 9.9%. PDCO’s earnings surpassed estimates in three of the trailing four quarters, the average beat being 2.7%. It currently carries a Zacks Rank #2 (Buy).

Patterson Companies has lost 11.8% compared with the industry’s 7.3% fall over the past year.

AMN Healthcare has lost 2.7% compared with the industry’s 62.4% fall over the past year.

Here's Why You Should Add First American (FAF) to Your Kitty