Notably, the company has already invested over $2 billion in its U.S. manufacturing footprint, which must have enabled the company to frequently ink supply deals for its solar modules like the latest one.

The company intends to achieve this by building its third U.S. manufacturing facility in Lake Township, OH and anticipates it to be operational by the first half of 2023. Once operational, the project would inexorably expand its Northwest Ohio footprint to a total annual capacity of 6 GW, thus taking First Solar one step ahead in its long-term goal. This is likely to make it the largest fully vertically integrated solar manufacturing complex outside China.

In a bid to accomplish its objectives, First Solar is also investing and developing facilities outside the United States. In this regard, it is imperative to mention that the company is already operational with its facility units in Vietnam and Malaysia and is also eyeing investment opportunities in India, wherein the company intends to build a 3.3 GW factory. The facility is expected to be operational by the second half of 2023.

Through substantial investments in numerous projects worldwide, First Solar intends to double its nameplate manufacturing capacity to 16 GW by 2024. Such expansion plans will enable First Solar to ink more such module supply agreements across the globe, which in turn, are likely to boost its operational performance in the long haul.

Per a Wood Mackenzie report, global solar PV installations are projected to grow at an annual average of 8% from 2022 to 2031 and cumulative solar installations are expected to surpass the 1,000 GWdc threshold, thus providing massive opportunities for solar players like FSLR.

Many solar players are increasingly expanding their footprint in this lucrative market.

For instance, in April 2022, Enphase Energy, Inc. (ENPH - Free Report) announced a partnership with ADT Solar, per which the latter intends to exclusively offer Enphase IQ8 Microinverters as part of its comprehensive home energy solution across the United States.

The Zacks Consensus Estimate for Enphase’s 2022 sales suggests growth of 50% from the prior year’s reported figure. The same for 2022 earnings implies growth of 41%.

In May 2022, SunPower (SPWR - Free Report) announced a collaboration with IKEA US, through which members of the IKEA Family customer loyalty program will be able to purchase home solar solutions, available through SunPower, to generate and store renewable energy and live more sustainably.

In a year, shares of First Solar have dropped 12.5% compared with the industry’s decline of 25.9%. 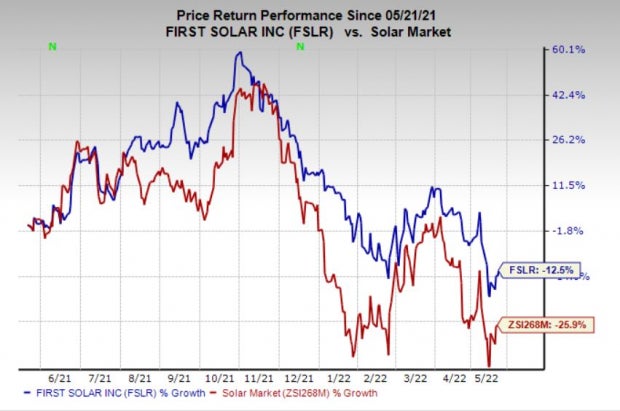 Can AutoZone (AZO) Maintain its Earnings Beat Run in Q3?