Driven by decent quarterly results, shares of VFC rose more than 2% after the market trading session on Apr 19. Although the Zacks Rank #4 (Sell) stock has lost 40.5% in the past six months, it came ahead of the industry’s decline of 41.4%. 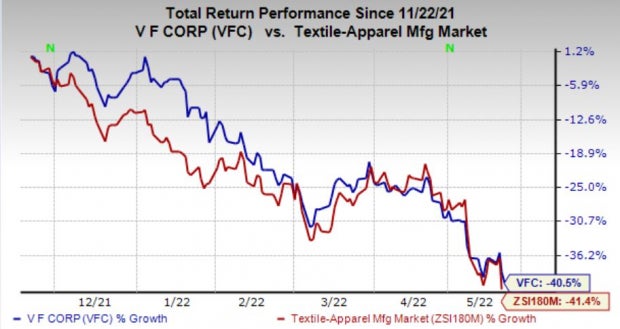 Net revenues of $2,825 million rose 9% year over year and beat the Zacks Consensus Estimate of $2,822 million. At cc, revenues were up 12%. The top line also gained from growth in the EMEA and North America regions, partly offset by sluggishness in the APAC region, stemming from the pandemic-led negative impacts. Also, the reported quarter included an additional week compared with the prior-year quarter.

For fiscal 2022, the company generated an operating cash flow of $864.3 million. It returned $194 million to shareholders through dividend payouts in the fiscal fourth quarter. VFC also bought back shares worth roughly $50 million, with $2.5 billion remaining under its existing share repurchase program. The company declared a quarterly cash dividend of 50 cents per share, payable Jun 21, 2022, to shareholders of record as of Jun 10.


Going ahead, adjusted cash flow from operations is likely to be roughly $1.2 billion for fiscal 2023. Capital expenditures is expected to be approximately $250 million.

V.F. Corp continues to adjust its business operations per the government guidelines associated with the COVID-19 pandemic. Although the majority of the company’s supply chains are currently operational, it has been witnessing port delays, equipment unavailability and other logistical challenges.

The company is working with its suppliers to minimize disruptions. Its distribution centers are operating in accordance with government guidelines to maintain safety and health protocols. All stores in North America remained open during the quarter. In the APAC region, including Mainland China, all stores were open in the beginning of the fiscal fourth quarter but 12% of these stores shut down at the end of the quarter. Currently, 19% of the stores remain closed. Meanwhile only 6% of stores in the EMEA region were closed in the quarter. Currently, all stores in EMEA remain open.

Management does not expect any further COVID-19-related lockdowns in any key region, with restrictions in China likely to ease from June 2022. For fiscal 2023, it anticipates revenue growth of at least 7% at cc with revenues at the North face brand likely to rise in low double digits while revenues from the Vans brand are expected to grow mid-single digit. Gross margin is predicted to expand 50 bps while operating margin is likely to be 13.6% year over year. The bottom line is envisioned to be $3.30-$3.40.

For first-quarter fiscal 2023, VCF predicts revenue growth in mid-single digit. Region-wise, the company expects to witness growth in the Americas and EMEA, while Asia Pacific is likely to remain weak. Post the fiscal first quarter, it anticipates gradual improvement in China.

GIII Apparel, a manufacturer, designer and distributor of apparel and accessories, presently sports a Zacks Rank #1 (Strong Buy). GIL has a trailing four-quarter earnings surprise of 160.6%, on average. You can see the complete list of today’s Zacks #1 Rank stocks here.

Oxford Industries, which is involved in designing, sourcing, marketing and distributing products bearing the trademarks of its owned and licensed brands, currently flaunts a Zacks Rank #1. OXM has a trailing four-quarter earnings surprise of 96.7%, on average.

Delta Apparel, a manufacturer of knitwear products, currently has a Zacks Rank #2 (Buy). DLA has a trailing four-quarter earnings surprise of 95.5%, on average.