The company’s results were mainly impacted by the tough year-over-year comparisons, owing to last year’s government stimulus and pent-up consumer demand due to the easing of COVID-led restrictions. Also, results were impacted by the inflationary pressures on consumers resulting from the Russia-Ukraine war.

Ross Stores’ stock slumped 25% in the after-hours trading session on May 19, driven by the fiscal first-quarter 2022 results and a conservative view for the rest of the year. Shares of the Zacks Rank #3 (Hold) company have lost 0.9% in the past three months compared with the industry’s decline of 12.7%. 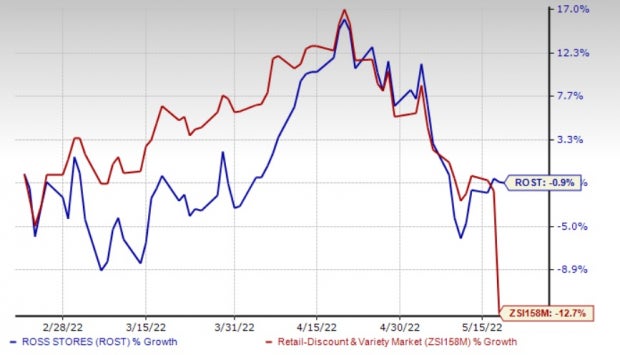 Ross Stores’ earnings of 97 cents per share missed the Zacks Consensus Estimate of 99 cents and declined 27.6% from $1.34 reported in the first quarter of fiscal 2021. Results included a 6-cent-per-share gain from the favorable timing of expenses, which are expected to reverse in the subsequent quarters. The company’s bottom line was impacted by soft sales and same-store sales (comps), as well as a decline in margins due to the ongoing cost headwinds.

Total sales of $4,333.1 million dropped 4.1% year over year and lagged the Zacks Consensus Estimate of $4,548 million. The sales decline resulted from a difficult year-over-year comparison due to last year’s government stimulus in the first half and pent-up customer demand as COVID-led restrictions eased. Further, sales were impacted by inflationary pressures on consumers, owing to the Russia-Ukraine conflict.

The men's category performed well, and the Florida region outperformed others. Sales trends at the dd's DISCOUNTS business were softer than Ross, as last year’s significant stimulus benefit led to difficult comparisons. Additionally, dd's DISCOUNTS was hurt by the inflationary pressures weighing on the lower-income household purchases in the reported quarter.

Selling, general and administrative (SG&A) expenses of $669.5 million declined 0.8% year over year. SG&A, as a percentage of sales, rose 50 bps year over year to 15.45%. The increase resulted from elevated wages and the deleveraging effect of lower comps.

The operating margin of 10.8% declined 340 bps from 14.2% in first-quarter fiscal 2021. The decline can be attributed to the deleveraging effect of the comps decline, as well as ongoing cost headwinds related to elevated freight and wages, which have been escalating from the second half of fiscal 2021.

As of the end of the fiscal first quarter, consolidated inventories increased 57.5% versus the 2021 comparable period, driven by higher packaway inventory. Average store inventory increased in the quarter, although it was still below the pre-pandemic levels. Merchandise packaway levels were at 43% of total inventories compared with 34% at the end of first-quarter fiscal 2021. Additionally, supply-chain congestions slightly eased in the fiscal first quarter, resulting in the early receipt of merchandise that is now stored in packaway and will flow to stores later in the year.

Concurrent with the earnings release, Ross Stores declared a regular quarterly cash dividend of 31 cents per share, payable Jun 30, 2022, to shareholders of record as of Jun 7, 2022.

Given the fiscal first-quarter performance and the uncertain macro-environment, Ross Stores provided a conservative view for the rest of fiscal 2022. For second-quarter fiscal 2022, the company expects comps to decline 4-6% compared with 15% growth in the prior-year quarter. Total sales are expected to decline 1-4% in the fiscal second quarter. Earnings per share are envisioned to be between 99 cents and $1.07 per share compared with $1.39 reported in second-quarter fiscal 2021.

Tecnoglass engages in manufacturing and selling architectural glass and windows, and aluminum products for the residential and commercial construction industries. It currently sports a Zacks Rank #1 (Strong Buy). Shares of TGLS have jumped 2.3% in the past three months.

The Zacks Consensus Estimate for Tecnoglass’ current financial-year sales and earnings per share suggests growth of 21.3% and 28.7%, respectively, from the year-ago period's reported figures. TGLS has a trailing four-quarter earnings surprise of 28.3%, on average.

Boot Barn, a lifestyle retail chain devoted to western and work-related footwear, apparel and accessories, currently has a Zacks Rank #2 (Buy). The company has a trailing four-quarter earnings surprise of 25.2%, on average. Shares of BOOT have declined 5.5% in the past three months.

The Zacks Consensus Estimate for Boot Barn’s current financial-year sales and earnings per share suggests growth of 17% and 4.4%, respectively, from the year-ago period’s reported figures. BOOT has an expected EPS growth rate of 20% for three-five years.

Abercrombie, a specialty retailer of premium, high-quality casual apparel for men, women and kids, currently has a Zacks Rank #2. The company has a trailing four-quarter earnings surprise of 103.5%, on average. Shares of ANF have declined 25.9% in the past three months.

The Zacks Consensus Estimate for Abercrombie’s current financial-year sales suggests growth of 3.7%, while the same for earnings per share indicates a decline of 22.5% from the year-ago period.