The divestment is part of ExxonMobil’s strategy to focus on more profitable assets with the lowest cost of supply. The transaction involves $750 million in cash, along with additional payments contingent on future natural gas prices. The deal is expected to close by the second quarter of this year.

With the divestment, Devon strengthened its liquidity position and moved closer to its $1.5-billion debt-reduction target. The completion of the divestiture allowed Devon to focus on its four oil-rich U.S. basin assets.

ExxonMobil had been operating in the Barnett Shale reliably and efficiently for almost two decades. The company is considering divesting assets in Asia, Africa and Europe as it focuses on operations in Guyana, and the Permian Basin of West Texas and New Mexico.

ExxonMobil has been on a major cost-cutting drive after suffering a historic $22.4-billion loss in 2020. By 2023, it expects to reduce annual costs by $9 billion in an attempt to quickly pay down debt. The company also plans to double earnings by 2027 from the 2019 reported levels.

Asset divestments are crucial components in ExxonMobil’s strategy to optimize cash management. In 2018, the company established a goal to raise $15 billion from asset divestments to reduce debt and focus on low-cost oil production. Notably, it is halfway toward achieving its goal.

Shares of ExxonMobil have outperformed the industry in the past six months. The XOM stock has gained 51.4% compared with the industry’s 36.3% growth. 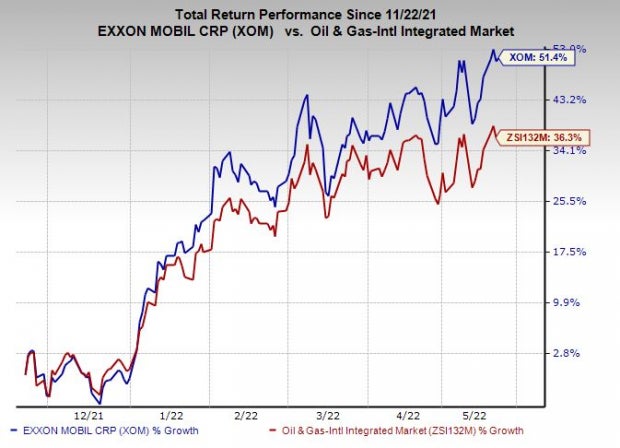 Continental Resources’ board of directors announced a quarterly dividend payment of 28 cents per share, a 21.7% increase from 23 cents paid out in the previous quarter. The amount will be paid out on May 23, 2022, to stockholders of record as of May 9, 2022.

EOG Resources announced a special dividend of $1.80 per share. The special dividend is likely to be paid out on Jun 30 to stockholders of record as of Jun 15. In the first quarter, EOG generated $2,363 million in free cash flow.