Berry Global Group, Inc. (BERY - Free Report) is likely to gain from its presence in diversified end markets that allows it to nullify risks associated with a single market. Strength across BERY’s end markets, including food, beverage, healthcare and pharmaceutical, and others, is likely to drive its performance in the quarters ahead. Also, its robust product portfolio and organic growth investments are likely to be beneficial in the coming quarters.

BERY follows a balanced capital-allocation strategy, which enables it to utilize the cash flow for acquisitions and repayment of debt. Berry Global’s acquired business of RPC Group (July 2019) boosted its growth opportunities in the recycled packaging and plastic industry. Also, BERY repaid long-term debt of $3,496 million and $9 million in fiscal 2021 and in the first six months of fiscal 2022, respectively.

Berry Global is also poised to gain from its growth investments. Its investments in latest equipment technologies and design for circularity continue to enhance its competency. Recently, BERY also started constructing a second manufacturing facility and a Global Healthcare Center  in Sira, Bangalore. Upon completion, the facility will enhance its research and development expertise and boost production in several major healthcare sectors.

However, Berry Global is witnessing the adverse impacts of escalating costs and operating expenses. BERY’s cost of sales increased 16.6% in second-quarter fiscal 2022 on a year-over-year basis. Headwinds from inflation in raw material, and other costs and challenges related to labor and supply-chain constraints are expected to persist in the near term, which might affect is margins and profitability.

BERY’s global presence exposes it to various environmental laws and regulations in the countries where it operates. The entity also remains vulnerable to foreign-currency and geopolitical issues. Forex woes hampered sales by $64 million year over year in the fiscal second quarter. Berry Global’s overseas business may take a hit from a stronger U.S. dollar in the quarters ahead. 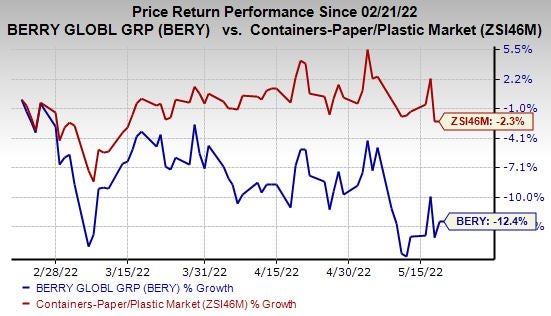 In the past three months, this currently Zacks Rank #3 (Hold) stock has dipped 12.4% compared with the industry’s decline of 2.3%.

Some better-ranked companies from the industrial products sector are discussed below.

Roper Technologies, Inc. (ROP - Free Report) presently has a Zacks Rank #2 (Buy). Its earnings surprise in the last four quarters was 2%, on average.