In the past week, there were quite a few updates on the impending takeover of Spirit Airlines (SAVE - Free Report) . On May 16, JetBlue Airways (JBLU - Free Report) , after being rejected initially on May 2, refused to give up and launched a hostile all-cash unsolicited tender offer to acquire all the outstanding shares of SAVE's common stock. However, the latter’s management stuck to its stance and turned down the offer put forth by the former yet again.

United Airlines’ (UAL - Free Report) management gave an improved revenue guidance for the June quarter as bookings continue to get healthier. In another encouraging update, UAL received the green signal from the Federal Aviation Administration (FAA) to operate its fleet of 52 Boeing 777s again. The jets are powered with  Pratt & Whitney engines. The planes have been grounded since February 2021 after a Honolulu-bound flight suffered an engine failure and made an emergency landing at the Denver International Airport. On the earnings front, Ryanair Holdings (RYAAY - Free Report) reported narrower-than-expected loss per share for the fourth quarter of fiscal 2022 (ended Mar 31, 2022).

Also, Latin American carrier Gol Linhas Aéreas Inteligentes (GOL - Free Report) announced that there will be a change at its helm with a new CEO in place from July this year.

1.In an SEC filing dated May 16, United Airlines’ management projected total revenue per available seat miles (TRASM: a measure of unit revenue) for second-quarter 2022 to increase in the 23-25% band from the second-quarter 2019 actuals. Per the previous TRASM forecast, given last month while releasing first-quarter 2022 results, the metric was expected to increase roughly 17% from the second-quarter 2019 actuals. However, due to rising oil price, UAL, currently carrying a Zacks Rank #3 (Hold), increased its average aircraft fuel price per gallon forecast for the June quarter. Management now expects the metric to be $4.02, higher than the previous estimate of $3.43.

2. In a letter addressed directly to the Spirit Airlines shareholders, JetBlue on May 16 tweaked its purchase price to $30 per share (without interest and less any required withholding taxes).  At that time, SAVE’s board of directors advised its shareholders against taking any rash action at the moment and decided that the board will first carefully review JetBlue’s tender offer. After reviewing, SAVE’s board urged its shareholders to reject the $30 per share cash tender offer, citing regulatory concerns.

3. Ryanair incurred a loss (excluding 50 cents from non-recurring items) of 98 cents per share in the fourth quarter of fiscal 2022, narrower than the Zacks Consensus Estimate of a loss of $1.11. However, the amount of loss narrowed significantly year over year. Quarterly revenues of $1,319.6 million fell short of the Zacks Consensus Estimate of $1,356.3 million but improved significantly year over year with higher traffic despite lower average fares (down 27% year over year due to Omicron-induced woes and the Russian invasion of Ukraine). Ryanair expects summer 2022 average fares to be higher than the summer 2019 level. RYAAY expects fiscal 2023 traffic to be 165 million, higher than the fiscal 2022 figure as well as 149 million registered in fiscal 2020 (pre-pandemic). RYAAY anticipates a return to profitability in fiscal 2023.

4. Gol Linhas announced that its President and CEO Paulo Kakinoff is set to shift from his current position to become a member of the board of directors. Kakinoff will be succeeded by Celso Ferrer, the vice president of operations. This transition will be effective Jul 1, 2022. Celso joined GOL in 2003 and has served the carrier in various capacities ever since.

GOL was also in the news recently when it reported impressive traffic numbers for April, driven by the improving air-travel demand scenario in Brazil. That story was covered in detail in last week’s write-up. 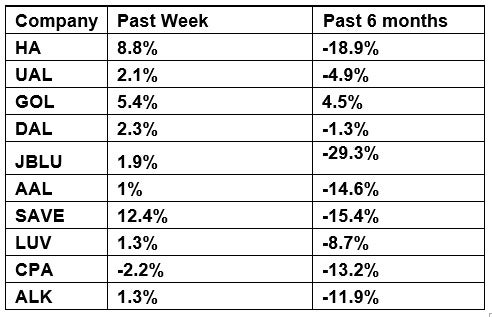 With the first-quarter 2022 earnings season over for the airlines, watch this space for the usual news updates.