Airbus SE (EADSY - Free Report) recently clinched a contract to provide logistics and engineering support services for the UH-72 Lakota helicopter. The deal has been awarded by the U.S. Army Corps of Engineers, Fort Shafter, HI.

Valued at $14.3 million, the contract is expected to concludeby December 2026. The work related to the deal will be performed in Grand Prairie, TX.

The UH-72 Lakota is the U.S. Army's multi-mission helicopter, which acts as the key platform for the U.S. Army, Navy and National Guard in their mission of protecting and serving communities across America. It combines operational capability, reliability and affordability, fulfilling all the Army's requirements for speed, range, endurance and overall performance. As an in-production helicopter with the FAA IFR certification, the UH-72 meets the Army's commercial off-the-shelf acquisition strategy.

The Lakota is based on the technologically-advanced and operationally-proven H145 helicopter, which is used worldwide for law enforcement, emergency medical transportation, search and rescue, offshore and utility operations and corporate transportation. Due to its excellent operational capabilities that are well-suited for any military expedition, Airbus may continue to witness a strong inflow of orders involving the helicopter from the U.S. Army, like the latest one.

As nations increase their defense spending to strengthen their national security systems, the demand for helicopters may witness a strong surge.  Per the report from Mordor Intelligence, the military rotorcraft market is projected to witness a CAGR of more than 3% during the 2020-2025 period.

The aforementioned growth projection bodes well for EADSY, with more than 100 armed forces worldwide placing their trust in Airbus products, thereby making Airbus one of the world's largest suppliers of advanced military helicopters.

The long-term earnings growth rate of Lockheed Martinis pegged at 5.7%. Shares of LMT have appreciated 9.4% in the past year.

The long-term earnings growth rate of Northrop Grumman is pegged at 6.1%. Shares of NOC have increased 19.2% in the past year.

The long-term earnings growth rate of Boeing is pegged at 4%. The Zacks Consensus Estimate for BA’s 2022 earnings indicates a growth rate of 22.9% from the prior-year reported figure.

In the past year, shares of Airbus have rallied 1% against the industry’s fall of 11.8%. 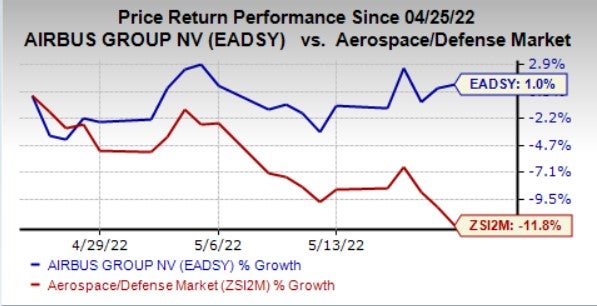 Diamondback (FANG) to Buy Rest of Rattler in All-Stock Deal