Per the terms of the trial, BP will supply marine biofuel to mining group Rio Tinto for around 12 months. This will be one of the most extended marine biofuel trials so far.

The fuel will be tested on Rio Tinto’s RTM Tasman vessel, which will operate on a mix of Transatlantic and Atlantic-Pacific routes. The trial results will help Rio Tinto explore possibilities to reduce carbon emissions from its marine fleet and decide its future biofuel strategy.

A lengthy trial will provide important information on the capability and intensive use of biofuel. The trial aligns with Rio Tinto’s strategy to reduce marine emissions across its value chain and support efforts to decarbonize the maritime industry.

The trial is exploiting a B30 biofuel blend manufactured by BP. It is formed by blending 30% fatty acid methyl esters with very low sulfur fuel oil. The B30 biofuel blend can reduce carbon emissions by up to 26% compared with standard marine fuel oil.

Sustainable biofuels are crucial to decarbonizing the shipping industry in the near and mid-term as the companies have been moving toward long-term net-zero solutions. The trials are part of BP’s continuous efforts toward a carbon-neutral future for shipping.

BP has set forth an ambition ‎to be a net-zero company by 2050. The company is working on important industrial sectors such as shipping, which have significant carbon emissions to control.

Headquartered in London, the U.K., BP is a fully integrated energy company, with a strong focus on renewable energy.

Shares of the company have outperformed the industry in the past month. The stock has gained 13% compared with the industry's 9.4% growth. 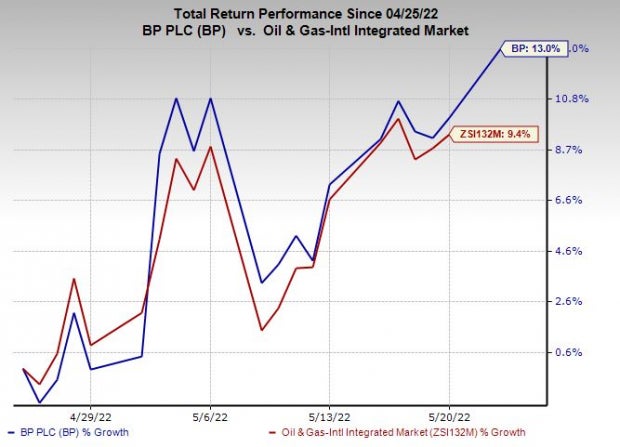 Cheniere Energy Inc. (LNG - Free Report) reported an adjusted profit of $7.35 per share in the first quarter, surpassing the Zacks Consensus Estimate of earnings of $3.34. The performance was aided by higher-than-expected sales in the reported quarter, backed by a rise in energy prices.

For 2022, Cheniere Energy mentioned that it is raising its financial guidance due to sustained strength in the global LNG market and an increase in expected LNG production. It revised the adjusted EBITDA guidance to $8.2-$8.7 billion from the existing $7.0-$7.5 billion.

PBF Energy Inc. (PBF - Free Report) reported first-quarter earnings of 35 cents per share, comfortably beating the Zacks Consensus Estimate of earnings of 26 cents. The strong quarterly results of PBF can be attributed to increased contributions from the Refining segment.

Baidu (BIDU) to Report Q1 Earnings: What's in the Offing?