Shockwave Medical's (SWAV) IVL Cleared for Use in China

Per the current estimates, with the increasing aging population in China, there is a growing prevalence of the calcified vascular disease. Resources also estimate that the risk of developing coronary artery calcification increases with age. According to Statistica, China had a population of more than 1.4 billion in 2020, 50% of whom were above the age of 40.

Per a medical expert well-versed with the clinical IVL procedure in China on severely calcified lesions in peripheral arteries, Shockwave IVL provides a powerful solution to calcified lesions that could not be effectively treated in the past. Thus, the expert believes it to be a promising approach for future treatments of such patients.

The Shockwave M5 and S4 IVL Catheters and Shockwave C2 Coronary IVL Catheters, used for the treatment of arterial calcification lesions, are approved in the United States, the European Union and other select international jurisdictions. These have been widely used to treat patients with peripheral arterial and coronary artery diseases across the world.

Per management, the approval in China is a milestone in the international expansion of Shockwave Medical’s IVL technology and is looking forward to bringing IVL to physicians and patients in China for the treatment of arterial calcification.

Per a report by Research and Markets published on Business Wire, the global PAD market was estimated to be more than $4.53 billion in 2019 and is anticipated to reach $8.78 billion by 2030, seeing a CAGR of 6.2%. Factors like rapid growth in the elderly population and subsequent increase in the prevalence of PAD cases, and a rising number of people suffering from diabetes and high blood pressure are likely to drive the market.

Given the market potential, the latest regulatory clearance is expected to provide a significant boost to Shockwave Medical’s business globally.

This month, Shockwave Medical announced that long-term data from the Disrupt PAD III trial found that superior vessel preparation with IVL led to excellent long-term outcomes out to two years with the preservation of future treatment options compared to percutaneous transluminal angioplasty in the treatment of calcified PAD.

This month, Shockwave Medical announced new data that confirms excellent one-year outcomes with coronary IVL in both women and men from the Disrupt CAD clinical program. 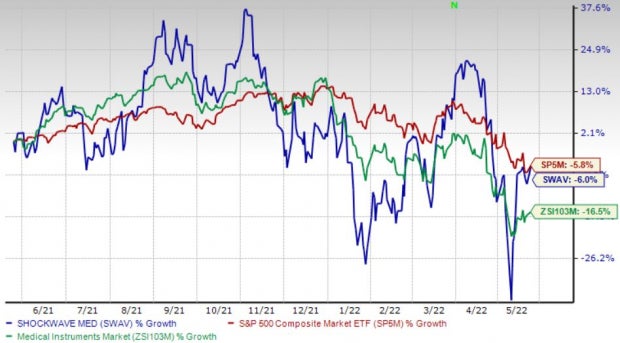 Alkermes, carrying a Zacks Rank #2 (Buy) at present, has an estimated long-term growth rate of 25.1%. ALKS’s earnings surpassed estimates in the trailing four quarters, the average beat being 350.5%.

Veeva Systems has lost 38.4% compared with the industry’s 58.1% fall over the past year.

AMN Healthcare has lost 0.2% compared with the industry’s 63.2% fall over the past year.