Abercrombie & Fitch Co. (ANF - Free Report) reported a loss per share in first-quarter fiscal 2022, which lagged the Zacks Consensus Estimate. However, sales beat estimates and improved year over year. Due to the soft bottom-line results, and expectations of the volatility in the supply environment and higher freight costs, the company lowered its sales and operating income view for fiscal 2022. It also provided a conservative view for the fiscal second quarter.

Driven by the dismal bottom-line performance and a bleak outlook, Abercrombie’s shares nosedived 28.6% on May 24. Shares of the Zacks Rank #2 (Buy) company have lost 49.9% in the past three months compared with the industry's decline of 29.9%. 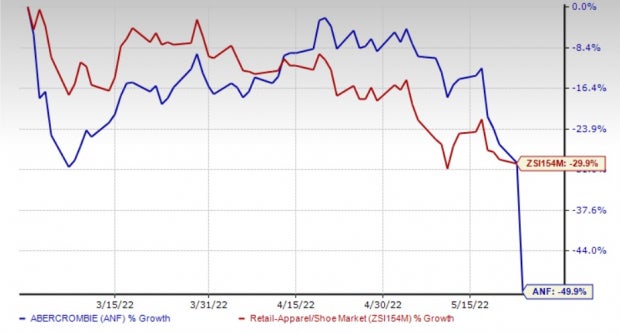 Abercrombie reported an adjusted loss of 27 cents per share in first-quarter fiscal 2022 that missed the Zacks Consensus Estimate of earnings of 8 cents and reflected a significant decline from earnings of 67 cents in the year-ago quarter. The dismal bottom-line results can be attributed to a lower gross margin, owing to higher freight costs and increased operating expenses related to higher marketing expenses and the absence of last year’s COVID-related rent abatements and government assistance.

Net sales of $813 million advanced 4% year over year and beat the Zacks Consensus Estimate of $801.6 million. This marked the higher first-quarter sales since 2014. Top-line growth was driven by continued strength in the Abercrombie & Fitch brand, which delivered better-than-expected sales. Meanwhile, Hollister’s sales were in line with expectations. However, sales growth was partly negated by a combined 100-basis-point (bps) impact from foreign currency volatility and the COVID-driven lockdowns in China.

The company noted that average unit retail (AUR) improved for the eighth consecutive quarter, driven by the favorable response to its products and experience. AUR gains can also be attributed to reduced promotional activity and higher tickets. The company implemented a targeted ticket increase in the fiscal first quarter based on competitive pricing analysis.

Sales By Region and Brands

Sales were strong in the United States, up 6% year over year to $585.1 million. International sales were flat with last year at $227.7 million, as EMEA sales returned to positive territory, while sales in APAC remained challenged by the ongoing COVID-led lockdowns. Sales in EMEA improved 3% year over year to $164 million, gaining from the reopening of the largest country in the region — the U.K. In APAC, sales declined 35% to $29.9 million.

The gross profit declined 9.2% year over year to $449.5 million. The gross margin contracted 810 bps to 55.3%. The decline can be attributed to $80 million of increased freight costs in the quarter, partly offset by AUR growth on lower promotions.

The company noted that AUR growth was more than offset by higher average unit costs (AUCs), driven by two factors. Firstly, the higher-than-expected freight costs due to the ongoing volatility in the global supply-chain environment resulted in higher AUC. Secondly, the gross margin rates were impacted by the highest exposure to Vietnam-related receipt delays of Hollister and Gilly Hicks in the late holiday season. The clearance of these goods attracted a lower gross margin than its spring goods, causing a reduction in the fiscal first-quarter gross margin rate.

Operating expenses, excluding other operating income, increased 5.5% from the year-ago period to $460 million. The year-over-year increase was mainly driven by the absence of the COVID-related rent abatements and government assistance recognized in the first quarter of fiscal 2021. Additionally, operating expenses increased due to investments and marketing expenses, as well as higher digital fulfillment expenses. As a percentage of sales, operating expenses of 56.9% rose 70 bps from 56.2% in the prior-year quarter.

The adjusted operating loss was $6 million against an operating income of $60 million in the year-ago quarter.

Abercrombie ended first-quarter fiscal 2022 with cash and cash equivalents of $468.4 million, long-term net borrowings of $303.9 million, and stockholders’ equity of $695.4 million, excluding non-controlling interests. The company had liquidity of $0.8 billion at the end of the fiscal first quarter, including cash and cash equivalents, and available borrowings of $314 million under the ABL Facility. Net cash provided by operating activities was $218 million as of Apr 30, 2022.

In the quarter under review, the company repurchased 3.3 million shares for $100 million. It now has $258 million remaining under its share repurchase authorization announced in November 2021.

In fiscal 2022, the company’s store plans will be focused primarily on store openings. It expects to open 60 stores in fiscal 2022 compared with the aforementioned 50 stores. The company expects most of these openings to occur in the back half of the year. The company reiterated its target of closing 30 stores this year.

For second-quarter fiscal 2022, management envisions a net sales decline in the low-single digits from the second-quarter fiscal 2021 reported level of $865 million. The sales view includes a 300-bps impact from adverse currency rates and COVID-related lockdowns in China, and a 300-bps negative impact from inflationary pressure on consumer demand.

The company anticipates a year-over-year decline in operating margin to 3-4% in the fiscal second quarter mainly due to higher freight and raw material costs. It expects the effective tax rate in the mid-30s.

For fiscal 2022, the company anticipates net sales growth of flat to up 2% from $3.7 billion reported in fiscal 2021. Earlier, it anticipated sales growth of 2.4%. The sales outlook assumes a negative impact of 200 bps from foreign currency and inflationary pressures on consumer demand, partly offset by outperformance in the fiscal first quarter.

The company expects an operating margin of 5-6%, which reflects a decline from the prior mentioned 7-8%. The guidance includes a combined 200-bps impact from higher freight and raw material costs, foreign currency, and lower sales. The company expects the effective tax rate for fiscal 2022 to be in the mid-30s.

The company noted that higher costs are likely to be a headwind, at least through the end of fiscal 2022. However, it anticipates slightly lower freight costs in the fourth quarter of fiscal 2022 from the prior year’s reported figure. The decline will mainly result from the absence of the increased air usage last year due to the shutdown in Vietnam.

3 Other Stocks to Watch

Boot Barn, the lifestyle retailer of western and work-related footwear, apparel and accessories, currently sports a Zacks Rank #1 (Strong Buy). BOOT has an expected EPS growth rate of 20% for three-five years. Shares of BOOT have declined 23.3% in the past three months.

The Zacks Consensus Estimate for Boot Barn’s current-year sales and earnings per share (EPS) suggests growth of 17% and 4.4%, respectively, from the year-ago period’s reported figures. BOOT has a trailing four-quarter earnings surprise of 25.2%, on average.

Designer Brands, which designs, manufactures, and retails footwear and accessories in North America, has a Zacks Rank of 2 at present. DBI has a trailing four-quarter earnings surprise of 112.8%, on average. The stock has dipped 0.1% in the past three months.

The Zacks Consensus Estimate for Designer Brands’ current-year sales and EPS suggests growth of 6.5% and 8.8%, respectively, from the year-ago period’s reported numbers.

Levi, which operates as an apparel company, presently carries a Zacks Rank #2. LEVI has a trailing four-quarter earnings surprise of 48.5%, on average. Shares of the company have declined 27.7% in the past three months.

The Zacks Consensus Estimate for Levi’s current-year sales and EPS suggests growth of 12.2% and 5.4%, respectively, from the year-ago period’s reported numbers.