According to the U.S. Census, sales of new single-family houses declined in April from March's levels and from April 2021's figures. The downside was wider than analysts' expectations and the sales pace was marked as the slowest since April 2020.

The U.S. housing market has seen many ups and downs since the beginning of the COVID-19 pandemic. Yet, the builders regained strength in second-half 2020 as the low-interest rate and less supply of homes worked in their favor. However, the industry has been suffering from rising mortgage rates and supply-chain disruptions, resulting in accelerated home price appreciation and insufficient inventory to build new homes.

Supply chain headwinds, intense inflationary pressure, and variability in oil and gas and major other input prices have impacted every housing and related industry business. Meanwhile, the Fed’s intention of reducing inflation via series of interest rate hikes adds to the woes.

The Zacks Building Products - Home Builders industry has declined 33.6% compared with the Zacks Construction sector and the S&P 500 Index’s fall of 23.8% and 17.1%, respectively, year to date.

The U.S. Census Bureau and the Department of Housing and Urban Development jointly stated that new home sales declined 16.6% in April from March’s downwardly revised data. Discouragingly, the reading lagged market expectation by 20.9%. 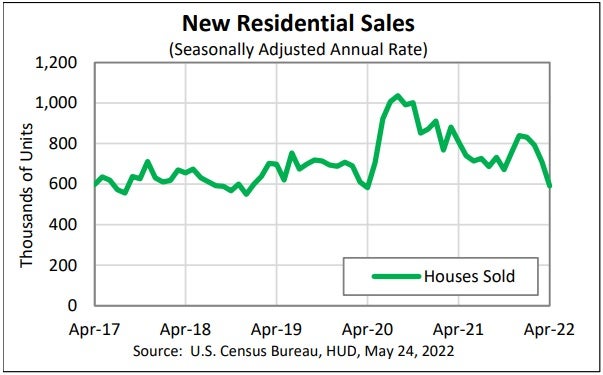 April’s new home sales fell 26.9% to a seasonally adjusted annual rate of 709,000 from April 2021’s estimated figure of 809,000. This marked the fourth consecutive month of decline and the steepest fall in almost nine years.

The significant drop in new home sales data points to the housing downturn. The picture will likely remain the same for the next couple of months as supply woes and near four-decade high inflation are expected to persist. Although builders have generated profits in second-quarter 2022, they are apprehensive about the future impact of industry headwinds.

Affordability has been an issue for buyers in the past few quarters as builders have announced consecutive price appreciations to shift inflationary pressure. Adding to the headwinds, the Federal government announced interest rates hike twice so far in 2022 to ease inflation. This has resulted in the priciest home loans in years.

According to the Freddie Mac's recent report, a 30-year free rate mortgage was 5.25% last week (ending May 19, 2022), significantly up from 3% a year ago. Mortgage applications for new home purchases declined 14% month over month and 10.6% year over year in April, per the Mortgage Bankers Association (MBA) Builder Application Survey (BAS) data published on May 19.

Joel Kan, MBA’s associate vice president of Economic and Industry Forecasting, stated, “The average loan size increased to a new survey high of $436,576, and over half of applications were for loan amounts greater than $400,000. Higher rates and sales prices and larger loan sizes are eroding housing affordability and pricing some buyers out of the market.”