Lyft (LYFT - Free Report) will be slowing down hiring and trimming costs at some of its departments, following a similar move by its rival Uber Technologies (UBER - Free Report) , according to reports. Shares of Lyft fell 17.3% at the close of business on May 24. Uber shares also took a hit, declining 9.4%.

Lyft, however, said that it was not planning to lay off employees. In fact, it intends to give “eligible team members” new stock options that would account for declines in the company’s share price.

Lyft shares have been trading significantly lower (declining as much as 46%) since the company released earnings on May 3. Despite an outperformance in the first quarter of 2022, shares of the company plunged nearly 30% following the earnings release, primarily due to its bleak second-quarter guidance. Management announced that due to increased investments in drivers and marketing, it estimates adjusted EBITDA to be only $10 million-$20 million in the second quarter. Adjusted EBITDA was $54.8 million in the first quarter.

Due to the Omicron-induced woes, rising gas prices and cost woes, shares of LYFT have slumped more than 60% so far this year, compared with the Internet - Services industry’s decline of 26.2%. 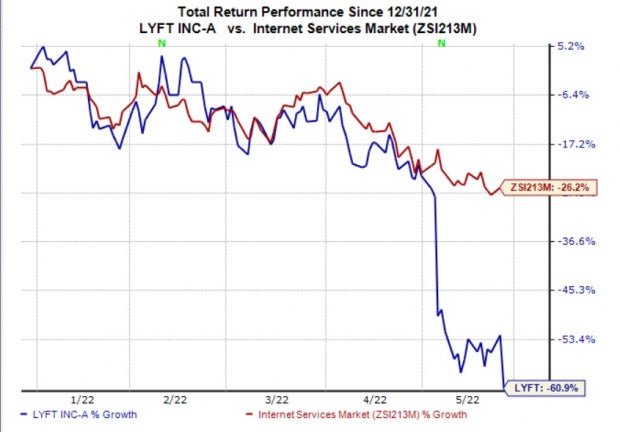 Earlier this month, Uber reportedly said that it was planning to reduce spending and slow down hiring due to a “seismic shift” in investor sentiment.

In order to serve its shareholders and their long-term interests better, UBER aims to make its business model leaner by cutting down expenses on marketing and incentive. “The least efficient marketing and incentive spend will be pulled back,” CEO Dara Khosrowshahi wrote in the email to staff. The email further stated that the company would “treat hiring as a privilege” and be conscious about when it adds workers.

Both Lyft and Uber carry a Zacks Rank #3 (Hold).

A better-ranked stock within the broader Computer and Technology sector is Analog Devices (ADI - Free Report) , which sports a Zacks Rank #1 (Strong Buy). The company has a stellar earnings surprise history, having outperformed the Zacks Consensus Estimate in each of the preceding four quarters, the average surprise being 7.7%. You can see the complete list of today’s Zacks #1 Rank stocks here.

Shares of Analog Devices have gained nearly 6% in a month.