Shares of Nordstrom, Inc. (JWN - Free Report) rallied more than 9% in the after-hours session on May 24, following the impressive first-quarter fiscal 2022 results.

Both top and bottom lines surpassed the Zacks Consensus Estimate and grew year over year. Results gained from solid demand, positive pricing, lower markdowns and broad-based growth across core categories and regions. Core categories, including men's and women's apparel, shoes, and designer, performed well. Consumers refreshing their wardrobes to get back to the office, for travel and other social activities also contributed to the quarterly results.

Also, it is progressing well with its More Reasons to Rack campaign, which led to increased brand awareness and boosted traffic. In the reported quarter, JWN opened its first ASOS co-branded store at the Grove in Los Angeles.

As part of its market strategy, the company launched additional pickup options, which have received positive customer feedback. Buy Online Pick Up in Store also remains one of the most used facilities. Management revealed plans to expand next-day order pickup options to more than 60 additional Rack stores. It also intends to launch a sustainable shoe brand, Allbirds, which will offer men's and women's shoes in select stores. The collection will be introduced on Nordstrom.com later this summer.

We note that this Zacks Rank #2 (Buy) stock has gained 0.5% in the past three months against the industry’s decline of 29.6%. 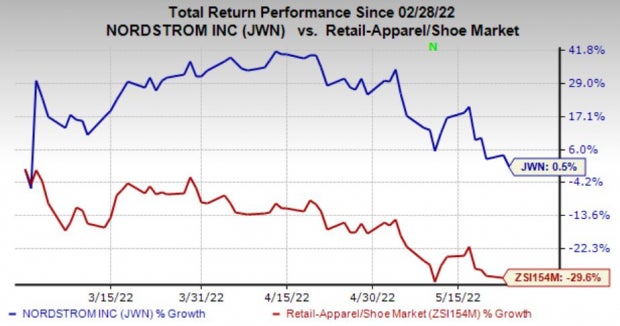 Nordstrom posted an adjusted loss of 6 cents per share, reflecting a sharp improvement from the year-ago loss of 64 cents. The metric also surpassed the Zacks Consensus Estimate of a loss of 8 cents per share.

Digital sales remained flat year over year as customers shopped more from stores. For the fiscal first quarter, digital sales represented 39% of net sales compared with 46% in the year-ago period.

Selling, general and administrative (“SG&A”) expenses, as a percentage of sales, contracted 320 bps year over year to 33.6% for the fiscal first quarter, owing to robust sales growth.

Nordstrom ended first-quarter fiscal 2022 with a strong balance sheet. Available liquidity as of Apr 30, 2022, was $1.3 billion, including $484 million of cash and cash equivalents, and $800 million available in its revolving line of credit. It had long-term debt (net of current liabilities) of $2,854 million and total shareholders’ equity of $589 million.

As of Apr 30, 2022, the company provided $187 million of net cash for operating activities and spent $96 million as capital expenditure.

The company recently approved a dividend of 19 cents, payable Jun 15, to shareholders of record as of May 31. It also announced a share repurchase program worth $500 million.

Driven by the solid quarterly results and gains from the sale of the company's interest in a corporate office building and an impairment charge related to a Trunk Club property, management raised the fiscal 2022 view.

It also predicts gross margin improvement and SG&A leverage stemming from higher sales, particularly in the first half of the year. This is likely to aid the adjusted EBIT margin in fiscal 2022.

Boot Barn, which provides western and work-related footwear, apparel and accessories, currently sports a Zacks Rank #1 (Strong Buy). The company has a trailing four-quarter earnings surprise of 25.2%, on average. You can see the complete list of today’s Zacks #1 Rank stocks here.

Dillard’s operates as a departmental store chain featuring fashion apparel and home furnishings. It presently sports a Zacks Rank #1. DDS has a trailing four-quarter earnings surprise of 224.1%, on average.