Masimo Corporation (MASI - Free Report) announced the findings of a favorable retrospective study in which researchers evaluated the potential ability of Masimo PVi (pleth variability index) to guide emergency room triage decisions for pediatric patients with signs of obstructive respiratory disease (such as an asthma attack or a reactive respiratory tract disease). The findings were published in the American Journal of Emergency Medicine.

It is worth mentioning that PVi is a non-invasive measurement of changes in perfusion index that occur during one or more respiratory cycles.

It should also be noted that the PVi is cleared as a non-invasive, dynamic indicator of fluid responsiveness in select populations of mechanically ventilated adult patients in the United States.

The latest positive study outcome is a stepping stone for Masimo’s patient-monitoring business across the world.

Per Masimo, an acute asthma attack is a common cause of admission to emergency departments (EDs) among children, and triage by severity is crucial for understanding suitable clinical treatment.

The researchers noted that PVi has been shown to be a precise method for measuring the degree of pulsus paradoxus (a reduction in systolic blood pressure associated with obstructive respiratory tract disease). Hence, they aimed to understand whether PVi might be useful to ED clinicians to make rapid triage decisions in such cases.

The investigators concluded that although Pulmonary Index Score is a vital tool for evaluating attack severity, it includes certain subjective parameters. Thus, automatic PVi measurement can be useful in intensive ED conditions, particularly in triage, for predicting the response of patients to treatment and follow-up results as it provides objective data. This can be achieved by rapidly determining the attack severity and reducing subjective clinical decision variations among physicians.

Per a report by MarketsAndMarkets, the global patient monitoring devices market is projected to reach $55.1 billion by 2025 from $36.4 billion in 2020, seeing a CAGR of 8.6%. Factors like technological advancements and growing preference for telehealth services amid the pandemic are expected to drive the market.

This month, Masimo announced its first-quarter 2022 financial results, wherein it reported solid top-line growth. The company also recorded robust order shipments in the reported quarter. The expansion of the company’s installed base is also impressive.

In May, the company announced the limited market release of the W1 health watch for consumers. The Masimo W1 offers accurate, continuous measurements and actionable health insights in a personal, discreet, lifestyle-friendly wrist-worn wearable.

In April, Masimo announced the findings of a retrospective study in which researchers investigated the impact of anesthesia during cardiac surgery guided by Masimo SedLine Brain Function Monitoring, in particular SedLine’s processed electroencephalography feature — the Patient State Index. 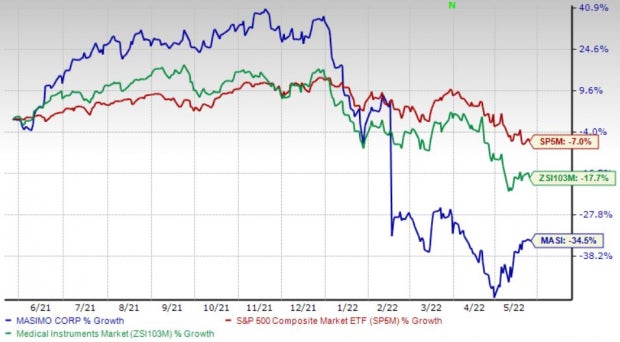 Alkermes, carrying a Zacks Rank #2 at present, has an estimated long-term growth rate of 25.1%. ALKS’s earnings surpassed estimates in the trailing four quarters, the average beat being 350.5%.

Veeva Systems has lost 40.9% compared with the industry’s 61.5% fall over the past year.

AMN Healthcare has lost 0.8% compared with the industry’s 64% fall over the past year.