Abbott (ABT) to Commence Limited Release of EleCare Soon

Abbott Laboratories (ABT - Free Report) recently announced that following the U.S. District Court for the Western District of Michigan’s amendment of a recent consent decree, the company would release limited quantities of its EleCare specialty amino acid-based formulas. EleCare was previously on hold following the Feb 17 recall of some powder infant formulas from its Sturgis, MI facility.

It is worth mentioning that the consent decree was amended at the request of Abbott and the FDA to enable the company to provide EleCare to children with urgent medical needs. These EleCare product batches were on hold pursuant to an agreement with the FDA.

However, it should be noted that Similac and Alimentum powder formulas, which were voluntarily recalled in February, are not included in this product release.

Abbott’s plans to restart production on Jun 4 at the Sturgis facility, where it will prioritize EleCare production, is expected to provide a significant boost to the company’s Nutritional Products segment on a global scale.

Significance of the Announcement

EleCare formulas are hypoallergenic (relatively unlikely to cause an allergic reaction) and are used by infants and children having severe food allergies or gastrointestinal disorders that require amino acid-based formulas. Following the commencement of production at the Sturgis facility, Abbott expects to provide an initial EleCare product release to consumers beginning on or about Jun 20.

Currently, Abbott has a limited inventory of these products, which should be sufficient to fulfill current patient needs until a new product is available. The products being released are EleCare (for infants 0-12 months) and EleCare Jr (for ages one year and up).

Abbott plans to start the distribution after all products are tested and they fulfill the product release requirements. The company also concluded additional enhanced testing to provide assurance that the product is safe to distribute.

Per a report by Fortune Business Insights, the global infant formula market was valued at $50.46 billion in 2019 and is anticipated to reach $109.10 billion by 2027 at a CAGR of 10.6%. Factors like the increasing relevance of nutritionally fortified infant formula and a rise in the number of women in the labor force are expected to drive the market.

Given the market potential, the limited release is likely to provide a significant boost to Abbott’s business globally.

In April, Abbott announced the U.S. availability of its Amplatzer Steerable Delivery Sheath, which is used with the company's Amplatzer Amulet Left Atrial Appendage Occluder to treat people with atrial fibrillation (AFib) who are at risk of ischemic stroke.

Also in April, Abbott announced favorable results from the PERSIST-END study, which showed that the majority of the patients treated for persistent AFib with the company's TactiCath Contact Force Ablation Catheter, Sensor Enabled (TactiCath SE) remained symptom-free for up to 15 months following the procedure. 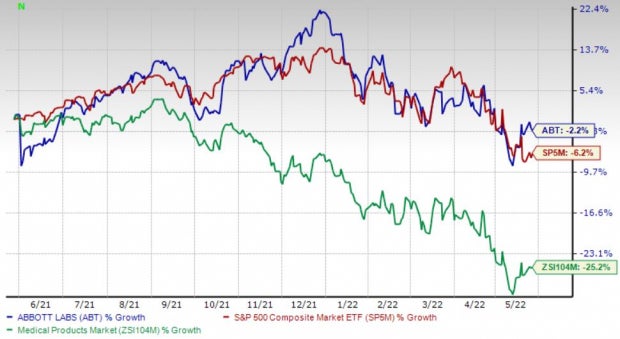 Patterson Companies, carrying a Zacks Rank #2 (Buy) at present, has an estimated long-term growth rate of 9.9%. PDCO’s earnings surpassed estimates in three of the trailing four quarters and missed the same in the other, the average beat being 2.7%.

Patterson Companies has lost 4.9% against the industry’s 1.5% gain in the past year.

Veeva Systems has lost 39% compared with the industry’s 60.4% fall over the past year.

AMN Healthcare has gained 3.1% against the industry’s 64.2% fall over the past year.