Energy companies have been under pressure amid the growing urgency to curb climate change. Nevertheless, this year has been a game-changer as major oil producers convinced investors with their proposals to lower carbon emissions. The instance can be attributed to concerns over the security of energy supplies and fuel prices overshadowing environmental challenges.

ExxonMobil shareholders disapproved a resolution submitted by the activist group, Follow This, urging rapid measures to curb climate change. In a preliminary voting session, only 28% shareholders supported the proposal to set and publish medium- and long-term targets to reduce emissions from ExxonMobil’s operations and energy products and reduce hydrocarbon sales.

ExxonMobil is actively investing in hydrocarbon production to prevent an energy crisis and the rising prices for consumers. The company’s directors previously suggested shareholders to vote against Follow This’ climate proposal as it believes scope 3 targets are not feasible to manage emissions.

Although ExxonMobil’s operational strategy received investors’ support, environmentalists scored a victory as shareholders demanded a better climate data analysis. It seeks an audited report evaluating the impact of the zero-carbon transition on the company’s finances.

The results imply a significant win for both investors and the world and a step-change in ensuring company accounts match climate rhetoric. ExxonMobil shareholders also supported the company’s executive compensation program.

Shares of ExxonMobil have outperformed the industry in the past six months. The stock has gained 59.8% compared with the industry’s 44.5% growth. 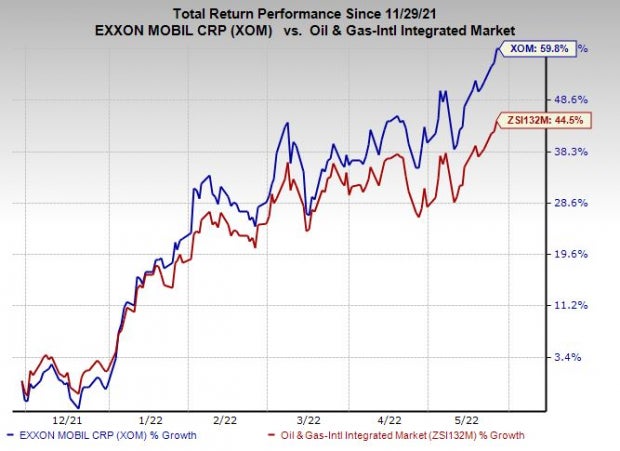 In good news for investors, Suncor declared a quarterly dividend of 47 Canadian cents per share, which marks an 11.9% increase from the prior dividend of 42 Canadian cents. The dividend is payable on Jun 24 to shareholders of record on Jun 3. Suncor also expanded its repurchase program to 10% of shares outstanding (from 7% before).

Petrobras (PBR - Free Report) is one of the largest publicly-traded Latin American oil companies, which dominates Brazil’s oil and gas sector. In the first quarter, PBR generated a positive free cash flow for the 28th consecutive quarter, with the metric rising to $7,932 million from $5,594 million recorded in last year’s corresponding period.

Petrobras, burdened with a huge debt load, emphasized its debt reduction in its recent five-year business management plan (2022-2026) to strengthen its credit rating. As PBR focuses on regaining its financial footing by selling assets and curtailing debt load, it successfully managed to lower gross debt below its 2022 target of $60 billion in the third quarter of 2021. Post the latest quarterly earnings, the figure stands at $58.6 billion.

Centennial Resource Development, Inc. (CDEV - Free Report) is an independent oil and gas exploration and production company. Centennial recently signed an accord to merge with Colgate Energy Partners. The agreement, likely to close in the second half of this year, will create a $7-billion Permian Basin pure-play.

At the March-end quarter, cash and cash equivalents were $50.6 million, while long-term net debt outstanding amounted to $801.2 million. Centennial had a net debt to capitalization of 22.4%. Notably, CDEV’s debt-to-total capital ratio has persistently been lower than the industry from the last year, reflecting lower debt exposure. This can provide it with financial flexibility for growth projects.