Oxbryta is approved by the FDA as an oral, once-daily treatment for SCD in patients aged 12 years or above.

In February 2022, the European Commission granted marketing authorization to Oxbryta as a monotherapy or in combination with hydroxycarbamide (hydroxyurea) for treating hemolytic anemia caused due to SCD in adult and pediatric patients aged 12 years and above.

In December 2021, the FDA granted accelerated approval to the supplemental new drug application seeking approval for Oxbryta to treat SCD in children aged four to less than 12 years.

Back then, the regulatory body also approved a new drug application for Oxbryta tablets for oral suspension — a new dispersible, once-daily tablet dosage for patients aged four to less than 12 years and for older patients who have difficulty swallowing whole tablets.

The drug has seen a strong uptake since its approval and launch. In the first quarter of 2022, Oxbryta generated sales worth $55.2 million, up 41% year over year. The nod in Europe and the label expansion approval are likely to drive Oxbryta sales further in 2022 and beyond.

Shares of Global Blood have dropped 13.8% so far this year compared with the industry’s decline of 24.5%. 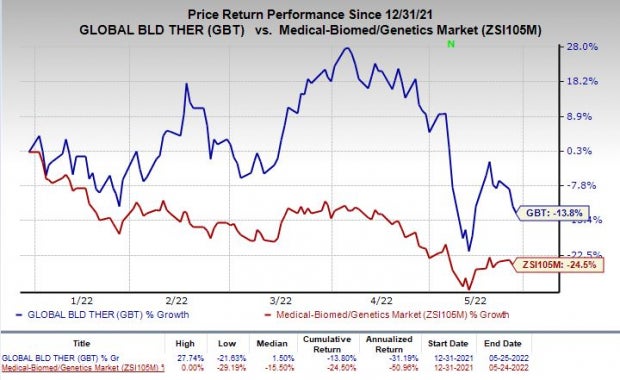 In July 2021, Global Blood initiated two pivotal phase III studies on inclacumab for the treatment of vaso-occlusive crisis (VOC) associated with SCD. Enrollment is currently ongoing in two phase III studies collectively called THRIVE, which are evaluating the safety and efficacy of inclacumab for the potential reduction of VOC frequency and VOC-related hospital readmissions of SCD patients.

The company has an exclusive license agreement with drug giant Roche (RHHBY - Free Report) for the development and commercialization of inclacumab.

Under the license agreement entered in August 2018, Global Blood licensed inclacumab from RHHBY. The partnership with Roche for inclacumab looks like a strategic fit for Global Blood.

We note that though Global Blood is currently riding on the success of Oxbryta, the company does not have any other approved product in its portfolio other than Oxbryta. Hence, due to the lack of a strong pipeline, the company is totally reliant on Oxbryta for growth, which does not bode well. Any regulatory setback for the drug will hurt the company’s prospects.

Also, competition remains tough in the target market as several other companies like Novartis and Editas Medicine, among others, are also developing treatments for SCD.

Earnings of AegleaBio Therapeutics have surpassed estimates in two of the trailing four quarters and missed the same on the other two occasions. AGLE delivered an earnings surprise of 9.47%, on average.