The company’s results were impacted by lower-than-expected demand in the fiscal first quarter, which hurt the operating income. Results were also impacted by a spectacular spring season comparison last year that was aided by stimulus payments and pent-up customer demand.

Additionally, the company witnessed pressure from unseasonably cold weather throughout the quarter due to the late arrival of spring. However, the company continued to gain from the execution of the “Real Power. Real Growth.” plan.

American Eagle’s shares declined 11.6% in the after-market session on May 26, thanks to the dismal first-quarter fiscal 2022 results. Shares of the Zacks Rank #3 (Hold) company have fallen 33.5% in the past three months compared with the industry’s decline of 28.5%. 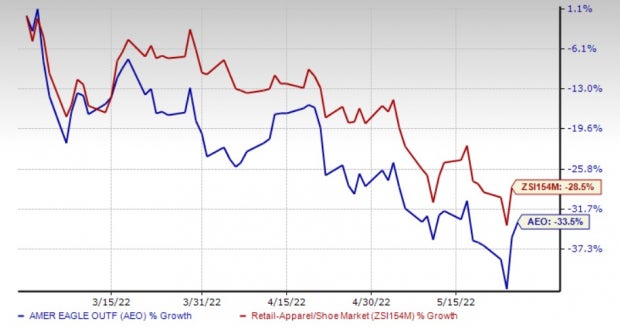 American Eagle reported earnings of 16 cents per share, which significantly missed the Zacks Consensus Estimate of 24 cents. The bottom line declined 66.7% from adjusted earnings of 48 cents reported in first-quarter fiscal 2021. The company’s results were impacted by lower-than-expected demand in the fiscal first quarter, which hurt the operating income.

Total net revenues of $1,055 million increased 2% year over year but lagged the Zacks Consensus Estimate of $1,137 million. Revenue growth was aided by a 3-percentage-point contribution from supply-chain acquisitions. Brand-wise, revenues declined 6% to $686 million for AE, while it advanced 8% to $322 million for Aerie.

The gross profit dropped 11% year over year to $388 million, while the gross margin contracted 540 basis points (bps) to 36.8%. This mainly resulted from a 340-bps impact of freight costs and a 120-bps impact of the recent supply-chain business acquisition. The company is on track to integrate and ramp up the supply-chain platform. The gross margin was also impacted by increased rent and delivery expenses, slightly offset by lower incentive compensation accruals.

Selling, general and administrative (SG&A) expenses rose 13% year over year to $298.8 million. As a percentage of sales, S&A expenses increased 270 bps to 28.3% due to a rise in store wages and hours, as well as increased corporate compensation, professional services and advertising expenses. This was partly negated by lower incentive compensation accruals.

American Eagle ended first-quarter fiscal 2022 with cash and cash equivalents of $228.8 million. Total shareholders’ equity as of Apr 30, 2022, was $1,383 million. The company had total liquidity, including available credit, of $581 million at the quarter-end.

In first-quarter fiscal 2022, the company opened 7 AE and 12 Aerie stores, while it closed 9 AE and 2 Aerie stores. The store opening for the Aerie brand included both stand-alone and Aerie OFFLINE aide-by-side formats. For AE, the company is on track with its target of rightsizing the brand store footprint.

That said, the company anticipates sales growth in second-quarter fiscal 2022 to be at similar levels as the first quarter. The gross margin rate is expected to be 33%, reflecting higher markdowns to clear the spring inventory, increased freight costs and impacts from the supply-chain acquisitions.

Boot Barn, a lifestyle retailer of western and work-related footwear, apparel and accessories, currently sports a Zacks Rank #1 (Strong Buy). BOOT has an expected EPS growth rate of 20% for three-five years. Shares of BOOT have declined 10.1% in the past three months. You can see the complete list of today’s Zacks #1 Rank stocks here.

The Zacks Consensus Estimate for Boot Barn’s current-year sales and earnings per share (EPS) suggests growth of 17% and 4.4%, respectively, from the year-ago period’s reported figures. BOOT has a trailing four-quarter earnings surprise of 25.2%, on average.

Designer Brands, which designs, manufactures, and retails footwear and accessories in North America, has a Zacks Rank of 2 (Buy) at present. DBI has a trailing four-quarter earnings surprise of 112.8%, on average. The stock has rallied 19.9% in the past three months.

The Zacks Consensus Estimate for Designer Brands’ current-year sales and EPS suggests growth of 6.5% and 8.8%, respectively, from the year-ago period’s reported numbers.

Fastenal, a national wholesale distributor of industrial and construction supplies, presently carries a Zacks Rank #2. FAST has a trailing four-quarter earnings surprise of 5%, on average. Shares of the company have gained 2% in the past three months.

The Zacks Consensus Estimate for Fastenal’s current-year sales and EPS suggests growth of 15.4% and 17.5%, respectively, from the year-ago period’s reported numbers. FAST has an expected EPS growth rate of 9% for three-five years.