The sBLA is supported by data from two pivotal studies — PRIME and PRIME2 — which evaluated efficacy and safety of Dupixent in adult patients with prurigo nodularis.

Data from the studies demonstrates that Dupixent has the potential to significantly improve disease signs and symptoms compared to placebo, including a reduction in itch and skin lesions.

A decision from the FDA regarding the approval of the label expansion of the drug to include adult prurigo nodularis patients is expected in September. A potential approval can be much earlier than September as the FDA approved a label expansion of the drug to include eosinophilic esophagitis patients within one and a half months of acceptance of the sBLA for the same. Dupixent is now the first and only medicine indicated for eosinophilic esophagitis in the United States, following its approval earlier this month.

Prurigo nodularis will be the fifth FDA-approved disease indication for Dupixent following a potential approval. Sanofi and Regeneron’s Dupixent is already approved in the United States, EU and some other countries for three type II inflammatory diseases, namely for certain patients with chronic rhinosinusitis with nasal polyposis, asthma and atopic dermatitis in different age populations. Dupixent is under review in Europe for eosinophilic esophagitis.

Sanofi stock has risen 10.1% this year so far compared with the industry’s increase of 6.5%. 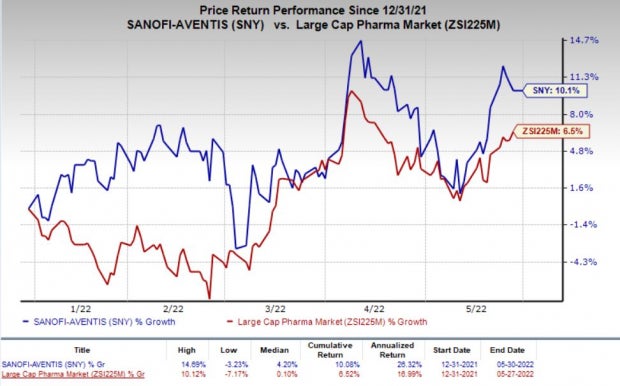 Dupixent is being jointly marketed by Regeneron and Sanofi under a global collaboration agreement. Sanofi records global net product sales of Dupixent while Regeneron records its share of profits/losses in connection with the global sales of the drug.

Dupixent sales are now annualizing at close to €6.0 billion after around three years on the market. Sanofi expects Dupixent to achieve more than €13 billion in peak sales.  The drug’s frequent label expansion approvals are driving sales higher. With outside U.S. revenues accelerating and multiple approvals for new indications and expansion in younger patient populations expected in the near future, its sales are expected to be higher.

The Zacks Consensus Estimate for Sesen Bio’s 2022 loss has narrowed from 33 cents to 31 cents per share in the past 60 days. Shares of SESN have declined 35.6% in the year-to-date period.

The Zacks Consensus Estimate for Alkermes’ 2022 loss per share has narrowed from 69 cents to 60 cents in the past 60 days. Shares of ALKS have risen 31.3% year to date.

Earnings of Alkermes beat estimates in each of the last four quarters, the average being 362.62%.