The Leisure and Recreation Products industry, while in the top 16% of industries is something of a mixed bag. That’s because the industry has had a couple of years of such strong growth that it is now contending with difficult comps, even in the peak season that’s about to start.

But looking closer at individual stocks I find that this is not the case for all players. And this again is because the industry is made up of a motley crowd not necessarily pursuing the same line of business. The lesson here seems to be that when selecting stocks in any industry, it’s probably a good idea to not jump to conclusions, either good or bad. A proper, in-depth study of stocks remains the best way to select winners.

My study revealed two broad sub-segments that remain particularly hot, the first being boating and the second, pools.

As far as the boating market is concerned, continued strength in demand this year is a driving factor. And as we’ve seen in the auto market, boats are getting sold before they even make it to the lots.

OneWater Marine (ONEW - Free Report) management has said that the company’s “pre-sold inventory remains elevated at almost double the level in the prior year period.” Malibu Boats (MBUU - Free Report) management says that “weeks on hand inventory continues to be about 13 weeks lower than previous historic lows.” They expect channel inventory builds in 2023 and potentially into 2024 when a normalization in channel inventories may be expected.

In a market where inventories remain low and demand so high, continued supply chain challenges and a tight labor market make a recipe for price hikes. And that’s exactly what’s happening right now. As prices escalate, demand for larger, higher-end boats in particular are increasing. Companies with larger retail networks like OneWater are in a somewhat better position to cater to the higher demand as they can adjust inventories between locations.

A strategy that some of the boating companies are adopting is greater vertical integration either with their supply sources or with their distribution channel. OneWater for example is acquiring its dealers while Malibu Boats is acquiring supply chain partners.

The pooling segment has benefited from the at-home economy in the last couple of years as people invested in their backyards when they couldn’t go anywhere else. Since the market is only opening up in fits and starts, companies are currently working through their backlogs, which should take a few more months. But commercial demand is coming back, so new pool construction demand remains strong.

More stable growth in this segment actually comes from maintenance and repair, as it is an ongoing activity. Also, as new pool construction has been quite high in the last two years, the existing base of pools has expanded, thus increasing demand for maintenance.

Companies like Pool Corporation (POOL - Free Report) that derive the bulk of their revenue from maintenance and repair are therefore well positioned for growth. Company management has even said that supply chain issues related to supplies for maintenance work have been easing of late, which is a positive for the company.

Let’s take a look at how the numbers for these companies are shaping up:

The preceding four-quarter average surprise for the Zacks Rank #1 company is 25.0%. OneWater is priced even cheaper than Malibu at 3.6X earnings and also below its median level of 6.1X over the past year.

Earnings for the two years are currently expected to grow 22.1% and 7.0%. In the last four quarters, the Zacks #2 (Buy) ranked company has topped estimates at an average rate of 24.0%. Pool Corp shares are relatively pricey at 20.9X earnings, but this too is well below its median level of 32.3X over the past year. 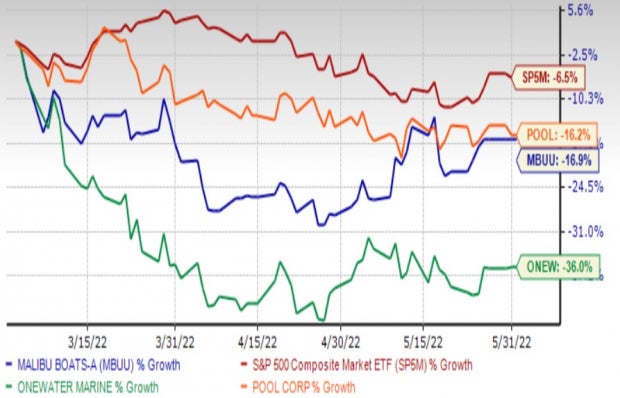