Shake Shack (SHAK) Down 49% in the Past Year: Is Revival Likely?

Shares of Shake Shack Inc. (SHAK - Free Report) have declined 48.7% in the past year compared with the industry’s fall of 15.4%. The decline was primarily due to the coronavirus pandemic and high costs. The COVID restrictions in Mainland China and Hong Kong negatively impacted the company’s performance during first-quarter 2022. However, the company is gradually recovering on the back of robust same-Shack sales and digital sales. Let’s delve deeper and find out the factors that can revive the Zacks Rank #3 (Hold) company’s share price. 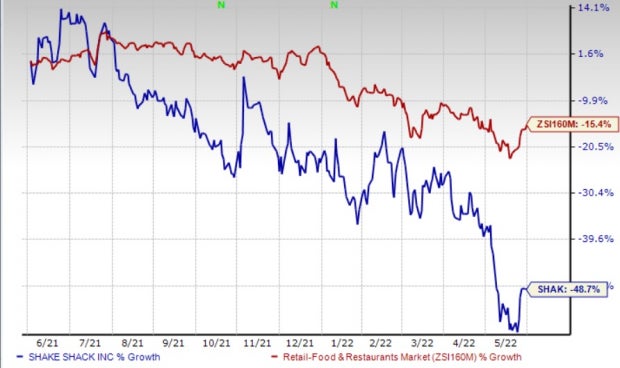 MarineMax sports a Zacks Rank #1. The company has a trailing four-quarter earnings surprise of 32.8%, on average. Shares of the company have declined 14.6% in the past year. You can see the complete list of today's Zacks #1 Rank (Strong Buy) stocks here.

The Zacks Consensus Estimate for MarineMax’s 2022 sales and EPS suggests growth of 16% and 21.5%, respectively, from the year-ago period’s levels.

BBQ Holdings carries a Zacks Rank #2. BBQ Holdings has a long-term earnings growth of 14%. Shares of the company have decreased 6.2% in the past year.

The Zacks Consensus Estimate for BBQ Holdings’ 2022 sales and EPS suggests growth of 46.1% and 67.6%, respectively, from the year-ago period’s levels.

Cracker Barrel carries a Zacks Rank #2. Cracker Barrel has a long-term earnings growth of 9.4%. Shares of the company have declined 35.1% in the past year.

The Zacks Consensus Estimate for Cracker Barrel’s 2022 sales and EPS suggests growth of 17.3% and 33.5%, respectively, from the year-ago period’s levels.

Here's Why You Should Retain Hyatt (H) in Your Portfolio