The biotech sector has been in the spotlight in the past week, with regular pipeline and regulatory updates.

Updates From Bristol Myers:  Bristol Myers Squibb (BMY - Free Report) announced that the FDA has approved Opdivo (nivolumab) combinations for yet another indication. The regulatory body approved the drug (injection for intravenous use) in combination with fluoropyrimidine- and platinum-containing chemotherapy as a first-line treatment of adult patients with unresectable advanced or metastatic esophageal squamous cell carcinoma (ESCC) regardless of PD-L1 status. Concurrently, Opdivo in combination with Yervoy (ipilimumab) was also approved for the same indication by the FDA.

Bristol Myers also announced results from a multicenter, phase II study through the primary analysis of the chimeric antigen receptor (CAR) T cell therapy Breyanzi (lisocabtagene maraleucel) in adults with refractory or relapsed large B-cell lymphoma (LBCL) after first-line therapy. Initial results showed Breyanzi delivered complete responses in more than half of the patients — who were not deemed fit for stem cell transplant — with refractory or relapsed large B-cell lymphoma after the first-line therapy.

Pipeline Updates From Biogen:  Biogen (BIIB - Free Report) and partner Denali Therapeutics announced that dosing started in the global phase IIb LUMA study to evaluate the efficacy and safety of BIIB122 (DNL151) compared to placebo in approximately 640 participants with early-stage Parkinson’s disease. BIIB122 is an inhibitor of LRRK2, a potential novel target intended to impact the underlying biology and slow the progression of Parkinson’s disease. It was discovered and developed by Denali. The phase IIb multi-center, randomized, double-blind, placebo-controlled study will evaluate the safety and efficacy of BIIB122 in people with early-stage Parkinson’s disease, aged between 30 years and 80 years.

Separately, Biogen and partner Sage Therapeutics, Inc. (SAGE - Free Report) announced positive results from the late-stage SKYLARK study of the pipeline candidate zuranolone, an investigational two-week, once-daily oral drug, which is being evaluated in women with postpartum depression (PPD). The study met its primary and all key secondary endpoints. Zuranolone 50 mg demonstrated a statistically significant and clinically meaningful improvement in depressive symptoms at Day 15, denoting the primary endpoint, and at days 3, 28, and 45, suggesting the key secondary endpoints. Zuranolone is also being developed for major depressive disorder (MDD).

Sage Therapeutics and Biogen initiated a rolling submission of a new drug application (NDA) to the FDA for zuranolone to treat MDD and also plan to complete the MDD NDA filing in the second half of 2022. An associated NDA filing for PPD is anticipated in early 2023.

Dupixent is being jointly marketed by Regeneron and Sanofi under a global collaboration agreement. Sanofi records global net product sales of Dupixent while Regeneron records its share of profits/losses in connection with the global sales of the drug. Dupixent is approved for use in certain patients with atopic dermatitis, asthma, CRSwNP or eosinophilic esophagitis in different age populations in a number of countries around the world.

The Nasdaq Biotechnology Index has gained 1.54% in the past four trading sessions. Among the biotech giants, Moderna has gained 10.05% during the period. Over the past six months, shares of Moderna have lost 58.76%. (See the last biotech stock roundup here: Biotech Stock Roundup: ETTX Up on Acquisition Deal, REGN Offers Updates) 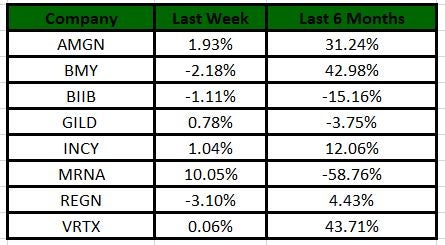