The Zacks Rank #2 (Buy) company remains on track with its PVH+ Plan, which aims to accelerate growth by boosting its core strength, and connecting Calvin Klein and TOMMY HILFIGER brands with consumers through five major drivers. These drivers are win with product; win with consumer engagement; win in the digitally-led marketplace; develop a demand- and data-driven operating model; and drive efficiencies and invest in growth.

In the fiscal first quarter, revenues advanced 2% year over year to $2,123 million. The top line also surpassed the Zacks Consensus Estimate of $2,079 million. This can be attributable to strength in international businesses, particularly in Europe. On the flip side, continued supply-chain and logistic headwinds, as well as the impacts of the pandemic, particularly in China, acted as deterrents in the quarter.

Direct-to-consumer revenues rose 4% year over year in the quarter. Revenues in the digital channel declined roughly 14% in the quarter under review.

The company's gross profit amounted to $1,122.6 million, down 0.6% year over year. The gross margin contracted 70 bps to 58.4%, owing to full-price selling, which offset higher freight costs.

Adjusted selling, general and administrative expenses rose 5.2% year over year to $1,039.4 million. Adjusted earnings before interest and taxes totaled $210.3 million compared with $248.7 million in the prior-year quarter. This mainly resulted from reduced expenses in the prior-year period due to store closures as well as lower marketing and investments, which were somewhat offset by higher sales.

The Heritage Brands segment's revenues declined 31% year over year in the quarter under review.

PVH Corp ended the quarter with cash and cash equivalents of $748.7 million, long-term debt of $2,216.5 million, and stockholders' equity of $5,268.5 million. The company also bought back $100 million of shares under its existing $3-billion share repurchase program in the quarter under review.

Despite the uncertainty related to the Ukraine war, macroeconomic challenges, inflationary pressure and the pandemic, management issued the view for the second quarter and fiscal 2022. It expected supply-chain and logistics disruptions to result in delivery delays, and a lack of inventory availability for stores and digital businesses.

For fiscal 2022, revenues are now anticipated to increase 1-2% year over year (up 6-7% on a cc basis), down from the earlier mentioned 2-3%. This is inclusive of a 2% reduction each for the exit of the Heritage Brands Retail business and the war in Ukraine. The bottom line is expected to be $9.20, rising from $9.00 per share mentioned earlier. Notably, it reported $13.25 and $10.15 on a GAAP and non-GAAP basis, respectively, in the prior year. The fiscal 2022 operating margin is likely to be 10%.

For second-quarter fiscal 2022, management expects a year-over-year revenue decline of 4-3%. This is inclusive of a 4% reduction for the exit of the Heritage Brands Retail business and a 2% decline stemming from the war in Ukraine. The bottom line is likely to be $2.20 on a GAAP basis and $2.00 on a non-GAAP basis. Notably, it reported $2.51 and $2.72 on a GAAP and non-GAAP basis, respectively, in the year-ago quarter. 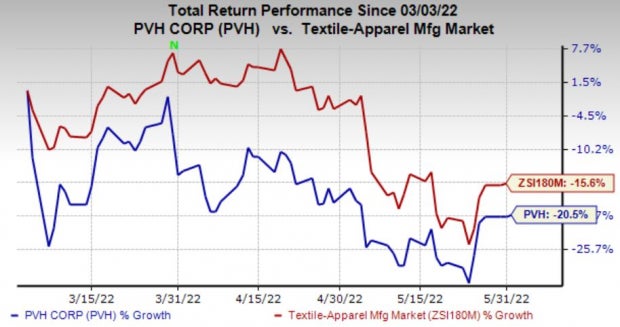 In the past three months, the stock has plunged 20.5% compared with the industry's decline of 15.6%.

Steven Madden is involved in designing, sourcing, marketing and selling private label footwear, handbags and accessories for women, men, and children. It currently flaunts a Zacks Rank #1 (Strong Buy). SHOO has a trailing four-quarter earnings surprise of 44%, on average. You can see the complete list of today’s Zacks #1 Rank stocks here.

Delta Apparel, a manufacturer of knitwear products, currently sports a Zacks Rank #1. DLA has a trailing four-quarter earnings surprise of 95.5%, on average.

GIII Apparel, a manufacturer, designer and distributor of apparel and accessories, presently has a Zacks Rank #2. GIL has a trailing four-quarter earnings surprise of 160.6%, on average.

Here's Why Centennial (CDEV) Stock Is a Great Investment Bet