T-Mobile US, Inc. (TMUS - Free Report) is on its way to making huge investments in network resources and expanding its emergency response fleet to make communications easier and keep people connected amid disasters like hurricanes and wildfires. The concerted efforts aim to keep customers, first-responders and local authorities connected.

To move toward this goal, the company is ready with 24/7 national Engineering Response & Crisis Management teams, Network Operation Centers to manage network traffic and pre-located cell sites on wheels to provide additional wireless capacity to hard-hit areas. It also runs consistent readiness drills throughout the year to ensure a rapid and effective response.

The proactive steps also include adding backup generators to its resource inventory and expanding its emergency response fleet with Wi-Fi connectivity. In addition, T-Mobile has partnered with national weather forecasters to understand storm patterns closely to provide effective short-term and long-term responses.

The nationwide 5G buildout across a mid and low-band spectrum provides extensive coverage penetration and proves crucial during natural disasters, increasing the network’s resiliency and infrastructure. Through the initiatives T-Mobile has increased its network emergency response capabilities on the ground.

The company is confident of its ability to unlock massive synergies. It launched a mid-band 5G spectrum in more than 410 cities and towns across the country for customers who want to experience up to gigabit-per-second peak 5G speed. It plans to continue speeding up the 5G spectrum at an aggressive pace. In many places, mid-band 5G average download speeds are around 300 Mbps, with peak speeds approaching 1Gbps. 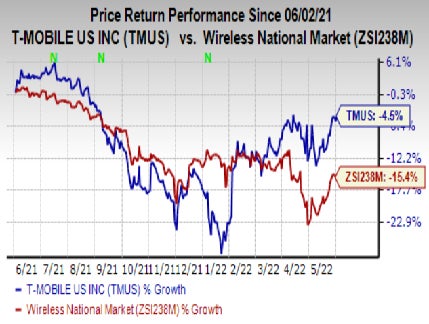 Shares of T-Mobile have lost 4.5% over the past year against the industry’s decline of 15.4%.

Coupa Software’s smart and efficient spend-control programs, which provide enhanced reporting and analytics, have been the primary reason behind its expanding clientele.

Silicon Motion Technology (SIMO - Free Report) also carries a Zacks Rank #2 at present. It has a long-term earnings growth expectation of 9%, with an earnings surprise of 1.05%, on average, in the trailing four quarters.

Silicon Motion has established itself as the leading merchant supplier of client SSD controllers to module makers, including most leaders in the United States.