Duke Energy (DUK - Free Report) recently revealed that its subsidiary, Duke Energy Indiana, increased clean energy output by 10% at its Markland Hydroelectric Station. Notably, the production capacity at this renewable energy facility, located near Florence, IN, has been increased by upgrading three hydroelectric turbines, generators and other equipment.

The Markland facility can now generate up to 65 megawatts (MW) of renewable energy, depending on the flow of the river, providing power to 52,000 homes.

Such upgrades take Duke Energy one step ahead in reaching its target of net-zero carbon emissions from electric generation by 2050.

No doubt the latest upgrade of equipment at the Markland facility is part of this renewable energy expansion target set by Duke Energy.

To mitigate the deadly effects of climate change, in the United States, utilities are increasingly adopting renewable energy sources to produce electricity. Per the latest forecast made by the U.S. Energy Information Administration (EIA), electricity generation from renewable energy sources is expected to rise from 20% in 2021 to 23% in 2022 and 24% in 2023, primarily driven by projected additions to the wind and solar energy generating capacity.

Apart from Duke Energy, other utilities have pledged net-zero carbon emissions to achieve a carbon-free environment.

For instance, DTE Energy (DTE - Free Report) remains committed to reducing the carbon emission from electric utility operations by 32% by 2023, 50% by 2030 and 80% by 2040 from the 2005 carbon emissions levels. To meet carbon reduction goals in the near term, DTE Electric plans to put in service a natural gas-fueled combined cycle generation facility in 2022.

DTE Energy boasts a long-term earnings growth rate of 6%. DTE came up with a four-quarter average earnings surprise of 8.97%.

The long-term goal is net-zero CO2 emissions from its generating facilities by 2050. Moreover, its 2022-2026 capital investment forecast includes $9.9 billion in a regulated renewables plan.

American Electric boasts a long-term earnings growth rate of 6.2%. AEP came up with a four-quarter average earnings surprise of 2.40%.

Ameren boasts a long-term earnings growth rate of 7.2%. AEE came up with a four-quarter average earnings surprise of 0.36%.

In a year’s time, shares of Duke Energy have gained 9.9% compared with the industry’s growth of 9.2%. 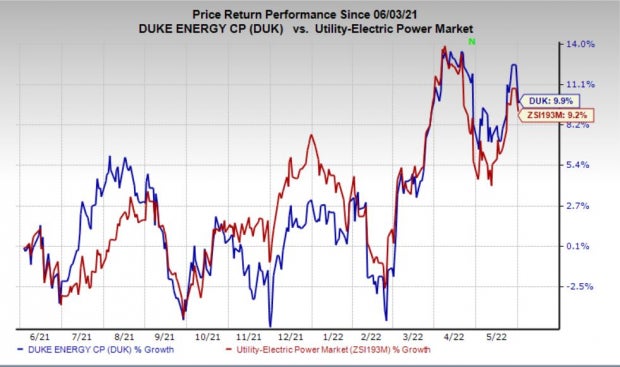