Molson Coors (TAP) Rises 17% YTD: Here's What You Should Know

Molson Coors Beverage Company (TAP - Free Report) has been gaining from the revitalization plan and the premiumization of its global portfolio. Strength across its Coors Light and Miller Lite brands, as well as its beyond beer approach, bodes well. The company remains on track with increased investments in core brands and innovations.

This led to the impressive first-quarter 2022 results, wherein earnings and sales surpassed the Zacks Consensus Estimate and improved year over year. The company marked the fourth successive quarter of top-line growth.

Consequently, shares of the Zacks Rank #3 (Hold) company have gained 17.3% year to date against the industry’s decline of 6.2%. 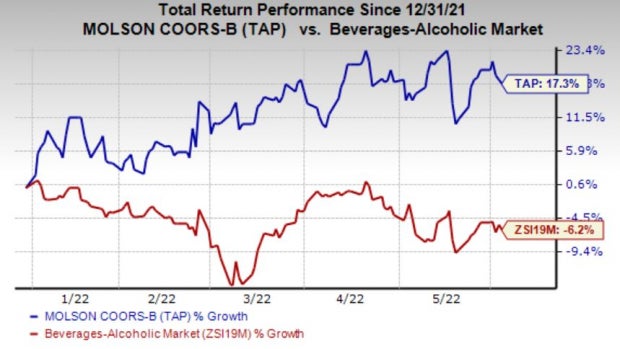 In first-quarter 2022, Molson Coors’ above-premium portfolio’s net sales grew more than 26% on a trailing 12-month basis. The U.S. above premium segment grew market share for five straight quarters. The improvement was largely driven by the continued success of the U.S. hard seltzer portfolio, particularly the nationwide launch of Topo Chico Hard Seltzer, which is a key part of its “beyond beer” approach. The launch of the Margarita packs is likely to drive further growth for the brand. The company also completed a capital project at the Fort Worth brewery in the first quarter, which is likely to help bring the U.S. Topo Chico Hard Seltzer production in house.

In Canada, the hard seltzer market has been witnessing continued momentum, driven by strength across Vizzy and Coors Seltzer. The introduction of Topo Chico Hard Seltzer to the Canada market is expected to boost growth.

Apart from the seltzer portfolio, above-premium beer remains a key growth driver. The company’s newly launched Praha, a relatively new pilsner from Staropramen, has been performing well in Central and Eastern Europe. The same has now been launched in Romania.

Further, Madri is witnessing strength in the U.K., which is another upside. In the reported quarter, TAP’s Blue Moon and Peroni generated double-digit sales growth on the back of on-premise recovery and continued momentum in the off-premise channel. Going ahead, management remains on track with the launch of Simply Spiked Lemonade in the United States. This is likely to drive its emerging growth division to become a $1-billion business in revenue terms by 2023.

Going ahead, it intends to invest in iconic brands and growth opportunities in the above-premium beer space; expand in adjacencies and beyond beer without hampering the support for its existing large brands; and create digital competencies for commercial functions, supply-chain-related system capabilities and employees. To facilitate these investments, it plans to generate savings of $150 million by simplifying the structure. The company is building on the strength of its iconic core brands. Additionally, its cost-saving program targets to save $600 million by 2023.

However, the company has been grappling with elevated marketing expenses due to higher investments in core brands and the latest innovations. Increased marketing investments in the first quarter, as planned, were above the first-quarter 2019 levels. Management expects a year-over-year double-digit rise in marketing spend for the second quarter.

Higher transportation costs and other input cost inflation remain concerning. The company is witnessing ongoing strikes at the Longueuil brewery and distribution centers. This is likely to hurt the second-quarter 2022 performance.

Archer Daniels, one of the leading producers of food and beverage ingredients as well as goods made from various agricultural products, currently sports a Zacks Rank #1 (Strong Buy). It has an expected long-term earnings growth rate of 6.4%. You can see the complete list of today’s Zacks #1 Rank stocks here.

The Zacks Consensus Estimate for Archer Daniels’ current financial-year sales and earnings per share suggests growth of 10.1% and 15.4%, respectively, from the year-ago reported numbers. The consensus mark for ADM’s earnings per share has been unchanged in the past 30 days.

Medifast is one of the leading manufacturers and distributors of clinically-proven healthy living products and programs. It currently carries a Zacks Rank #2 (Buy).

The Zacks Consensus Estimate for Medifast’s current financial-year sales and EPS suggests growth of 19% and 11.5%, respectively, from the year-ago period’s reported figures. MED has a trailing four-quarter earnings surprise of 13%, on average.

Sysco, the marketer and distributor of food and related products, currently has a Zacks Rank #2. SYY has a trailing two-quarter earnings surprise of 93.75%, on average. It has an expected long-term earnings growth rate of 11%.

Is Hudbay Minerals (HBM) a Suitable Stock for Value Investors?