Intercept (ICPT) Announces Delay in Meeting With the FDA

Intercept Pharmaceuticals, Inc. (ICPT - Free Report) has announced a delay in its pre-submission meeting with the FDA regarding the potential resubmission of its new drug application (NDA) for nonalcoholic steatohepatitis (NASH)  treatment based on an interim analysis of the REGENERATE trial in patients with fibrosis due to NASH.

In June 2020, Intercept received a complete response letter (CRL) from the FDA stating that NDA for obeticholic acid (OCA) for the treatment of liver fibrosis due to NASH could not be approved in its present form. Thereafter, Intercept had an end of review meeting with the regulatory body in October 2020 to discuss the FDA’s risk-benefit assessment in the CRL based on its review of the available data, as well as its proposed resubmission of the NDA for the same.

Per FDA’s guidance, Intercept decided to resubmit the NDA based on the phase III REGENERATE 18-month biopsy data, together with a safety assessment from its ongoing studies.

Following the end of the review meeting, Intercept had a discussion with the FDA regarding the REGENERATE study to clarify data, a new consensus read methodology for liver biopsies and analyses required to resubmit NDA. The company was in the process of generating a new data package from the REGENERATE study using the new liver biopsy consensus read methodology and had targeted a potential pre-NDA submission meeting with the FDA in June 2022.

However, the meeting is now scheduled for July following a recent request from the FDA that top-line data from REGENERATE has to be provided to the agency for its review prior to the meeting. Intercept anticipates that the data will be available and made public in July. 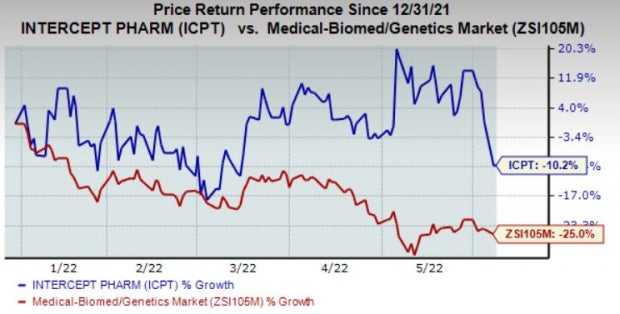 Intercept was a frontrunner in receiving potential approval for the treatment of NASH. The delay in the meeting will lead to a postponement in a tentative approval as well.

Quite a few players are trying their hand at successfully developing a treatment for the same.

Another company, Viking Therapeutics (VKTX - Free Report) , is developing a candidate, VK2809, for biopsy-confirmed NASH and fibrosis. VK2809 is currently being evaluated in a phase IIb study in patients with NASH.  Viking expects to complete enrollment in the second half of 2022.

Pfizer (PFE - Free Report) recently announced that the FDA has granted Fast Track designation to its investigational combination therapy for the treatment of NASH with liver fibrosis.

Pfizer is currently evaluating the combination in an ongoing mid-stage study.The study is evaluating the impact of treatment on the resolution of NASH or improvement in liver fibrosis and is expected to complete in 2024.

ALKS’ loss estimates for 2022 have narrowed to 3 cents from a loss of 14 cents in the past 60 days. Alkermes surpassed earnings in all the trailing four quarters, the average being 350.48%.