Valued at $40 million, the contract is expected to get completed in September 2024. Per the terms of the deal, Boeing will procure 63 Distributed Targeting Processor - Networked (DTP-N) B-kits and 56 DTP-N A1-kits as well as DTP-N cyber security support data deliveries for supporting DTP-N full-rate production to implement anti-surface warfare capability in the F/A-18E/F and EA-18G aircraft.

Work related to this deal will be carried out in St Louis, MI.

F/A-18 Super Hornet combat aircraft has emerged as the leading choice of weapon for militaries across the world. The Royal Australian Air Force and the Kuwait Air Force, apart from the U.S. Navy, operate these fighter aircraft in large numbers. Furthermore, nations like Canada, Finland, Switzerland and Spain currently have Boeing’s Super Hornet in their arsenal.

The F/A-18 fleet enjoys strong demand in the aircraft market, which is further evident from the latest contract win.

With rising security threats across the globe, emerging economies like the Asia Pacific, the Middle East and South America are spending a lot on enhancing their defense arsenals. Developed nations like the United States and Europe have already been leading the defense market. With the United States being the largest weapons exporter worldwide, the nation has been spending amply on defense products, including combat aircraft. Boeing, being the largest aircraft manufacturer in the United States, thus enjoys a dominant position in the combat aircraft market.

Per a Mordor Intelligence report, the global military aircraft market is expected to witness a CAGR of more than 4% during the 2022-2031 time period, with North America constituting the largest share of this market. Such growth can be attributed to a rise in global threats and geopolitical instabilities, and increased spending on defense.

Lockheed Martin boasts a long-term earnings growth rate of 5.7%. LMT’s share price has gained 14.4% in the past year.

Textron boasts a long-term earnings growth rate of 12.7%. The Zacks Consensus Estimate for TXT’s 2022 earnings indicates a year-over-year improvement of 8.2%. 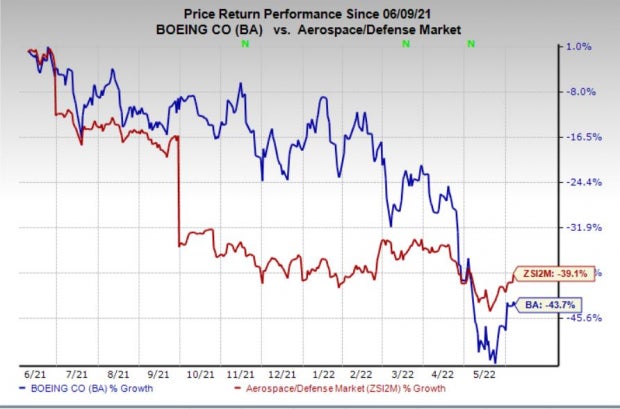 Cohen & Steers' (CNS) May AUM Down on Unfavorable Markets