With air-travel demand increasing by the day as reflected in the northbound trend in bookings, American Airlines (AAL - Free Report) and Alaska Air Group (ALK - Free Report) provided an improved view for their respective second-quarter 2022 revenues. AAL and ALK thus join other U.S. carriers in raising the second-quarter 2022 revenues as discussed in the previous week’s write-up.

Also, driven by an improved air-travel demand situation, Brazilian carrier Gol Linhas Aéreas Inteligentes (GOL - Free Report) reported upbeat traffic numbers for May. In the latest development on the awaited takeover of Spirit Airlines (SAVE - Free Report) , SAVE pushed back its shareholders’ vote on the deal with Frontier Group Holdings (ULCC - Free Report) to Jun 30 from Jun 10. Per management, "The special meeting was postponed to allow the Spirit Board of Directors to continue discussions with Spirit stockholders, Frontier and JetBlue Airways." Notably, both JetBlue (JBLU - Free Report) and Frontier submitted their proposals to take over Spirit.

1.On the back of upbeat air-travel demand and favorable pricing, American Airlines, currently carrying a Zacks Rank #3 (Hold), expects total revenues to rise between 11% and 13% from the second-quarter 2019 actuals (earlier expectation was an increase in the 6- 8% range). Total revenue per available seat miles (TRASM: a measure of unit revenue) is now anticipated to be 20-22% higher than the second-quarter 2019 reading (earlier estimate was a 14-16% rise). Driven by upbeat demand, the pre-tax margin, excluding net special items, is anticipated in the 4-6% range compared with the 3-5% band expected earlier. Due to high oil price, the current-quarter average fuel cost per gallon forecast is raised to the $3.92-$3.97 range from the $3.59-$3.64 band expected earlier.

2. Alaska Air currently expects total revenues to increase 12-14% from the second-quarter 2019 actuals. Earlier expectation was for a 5-8% increase. Driven by upbeat demand, load factor (% of seats filled with passengers) is anticipated in the 87-88% range (earlier expectation was in the 85-88% band). Revenue passengers are likely to be down in the 9-10% band. Earlier expectation was for a 10-12% decrease.  Capacity is expected to decline in the 7-9% range (earlier forecast called for a 6-9% fall). Due to high oil price, the current-quarter economic fuel cost per gallon forecast is raised to the $3.65-$3.68 range from the $3.25-$3.30 band expected earlier. ALK’s management is of the view that the revenue strength is offsetting increases in oil prices. Total non-operating expenses in the June quarter are still expected in the $7-9 million range.

3. In May 2022, consolidated traffic at Gol Linhas surged 97.1% year over year. To match the increased demand situation, GOL is expanding capacity. In the same month, capacity grew 124.5% year over year. GOL carried 91% more passengers last month from the year-ago levels. Upbeat traffic in its domestic markets is leading to the rosy scenario on a consolidated basis. In May, domestic traffic and capacity improved 82.3% and 110%, respectively. On the domestic front, 84.3% more passengers boarded GOL’s flights in May.

4. JetBlue continues to pursue its interest in acquiring Spirit Airlines. Despite being turned down twice, JBLU yet again submitted an “improved proposal” to SAVE’s board to acquire the latter’s all outstanding shares. Per the enhanced bid, JetBlue is offering to pay a reverse break-up fee of $350 million ($3.20 per Spirit Airlines share) in case the deal fails to materialize due to antitrust concerns. This is higher than its initial offer of a $200-million reverse break-up fee. It is also more than Frontier’s offer to pay a reverse termination fee of $250 million. 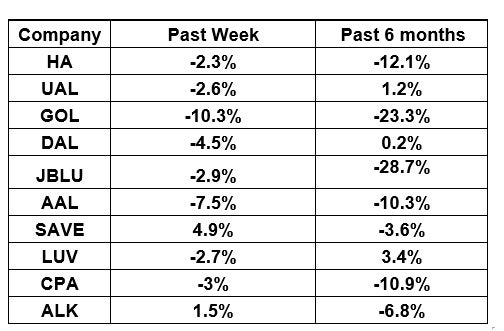 Stay tuned for further updates on the impending takeover of Spirit Airlines.

Here's Why Investors Should Bet on Cigna (CI) Stock Now