Catalent, Inc. (CTLT - Free Report) recently entered into a development agreement with MigVax to leverage its proprietary Zydis Bio orally disintegrating tablet (“ODT”) technology for delivering the MigVax-101 vaccine. Per the terms of the agreement, Catalent will undertake a feasibility study at its Zydis facility in Swindon, U.K. to formulate MigVax-101 into a Zydis Bio ODT dose form and evaluate its preclinical performance and stability properties.

It is noteworthy to mention that MigVax is an Israeli biopharmaceutical company developing an oral subunit vaccine against COVID-19.

The latest development agreement is expected to further strengthen Catalent’s foothold in the global Oral and Specialty Delivery space.

MigVax’s lead oral vaccine program, MigVax-101, has indicated positive results in preclinical tests. Being an oral formulation, MigVax-101 can offer substantial potential advantages in low-and middle-income countries over currently available first-generation injected vaccines. Some of the advantages include ease of administration, transport and storage, the potential to tackle future variants, and applicability to a broader population. Apart from this, MigVax’s oral approach may allow for mucosal protection, a benefit that may play an important role in preventing infection.

Catalent’s Zydis technology, which creates a freeze-dried tablet that disperses almost instantly in the mouth without water, provides various advantages over traditional oral dosage forms, including improved patient compliance and convenience, among others.

Per Catalent’s management, Zydis Bio technology, which has previously been used to successfully deliver antigens to the oral mucosae, is expected to offer several potential benefits to this program.

MigVax’s management believes that following the transportation of its vaccines using the Zydis Bio technology in unrefrigerated vehicles and storage in standard warehouses, it will be simpler and cost-effective for countries to roll out mass-vaccination programs.

Per a report by Future Market Insights, the global oral solid dosage pharmaceutical formulation market is projected to grow from $493.2 billion in 2017 to $926.3 billion by 2027-end at a CAGR of 6.5%. Factors like oral solid dosage forms being cost-effective and easy to manufacture, trouble-free packaging and transportation, and increased chemical and physical stability of said dosage forms are likely to drive the market.

Given the market potential, the latest agreement is expected to provide a significant boost to Catalent’s business globally.

In April, Catalent completed a significant expansion of its nasal capabilities at its Morrisville, Research Triangle Park, NC facility to provide improved services for the development and manufacturing of unit and bi-dose nasal spray products. 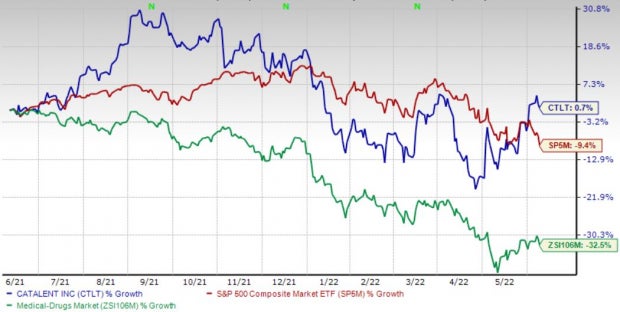 AMN Healthcare, carrying a Zacks Rank #2 (Buy) at present, has an estimated long-term growth rate of 1.1%. AMN’s earnings surpassed the Zacks Consensus Estimate in all the trailing four quarters, the average beat being 15.6%.

AMN Healthcare has gained 5.2% against the industry’s 65.3% fall in the past year.

HealthEquity, carrying a Zacks Rank #2 at present, has an estimated long-term growth rate of 20.3%. HQY’s earnings surpassed estimates in two of the trailing four quarters and missed the same in the other two, the average beat being 1.4%.

HealthEquity has lost 19.6% compared with the industry’s 65.3% fall over the past year.

Masimo, carrying a Zacks Rank #2 at present, has an earnings yield of 3.3% against the industry’s negative yield. MASI’s earnings surpassed estimates in the trailing four quarters, the average beat being 4.4%.