Here's Why You Should Hold Harley-Davidson (HOG) Stock Now

Harley-Davidson’s (HOG - Free Report) top line is likely to benefit from its rebranding strategy, which looks to tap into new segments. Its Hardwire and Rewire plans also bode well and are likely to enhance the firm’s growth. However, supply-chain bottlenecks, chip crisis and escalating investment expenses might clip margins.

Harley-Davidson forecasts the motorcycles segment’s revenues to grow in the band of 5-10% on a year-over-year basis for 2022. Operating margin for the HDMC is forecast within 11-12%, up from the 2021 level of 9%. HOG anticipates the parts/accessories and apparel and licensing businesses to accelerate top-line growth. The H-D1 marketplace platform, launched in 2021, is also set to fuel the company's prospects.

HOG’s Hardwire strategy, launched in February 2021, aims at long-term profitability and growth through refreshed product offerings. Hardwire’s financial goals from 2021 to 2025 include mid-single-digit annual growth in revenues and a steady improvement in the operating margin from motorcycle sales and double-digit growth in the Financial Services segment. Per the plan, the company remains focused on bolstering its market position by emphasizing sportier bikes and a modern marketing strategy.

Harley-Davidson’s Rewire turnaround plan is also yielding positive results. Through its new and effective operating model, HOG has cleared excess inventory, streamlined the model line-up by 40% and overhauled the launch timing and go-to-market practices for maximum success. It has reset global businesses, exited unprofitable international markets and prioritized 50 markets, primarily in North America, Europe and the regions in Asia-Pacific that hold high potential. These developments augur well for the firm’s prospects.

Dedicated efforts in rebranding itself and reinvigorating product launches bode well for the firm. Harley-Davidson is focused on making investments in core segments of Touring and heavyweight Cruiser unit. It also intends to expand into the untapped segments of Adventure Touring in a bid to become more millennial-friendly. The popularity of Grand American Touring motorcycles is boosting profits. Successful launches of Pan American and Sportster S. augur well for the firm's top-line growth.

Harley Davidson outpaced the Zacks Consensus Estimate in three of the trailing four quarters, delivering an earnings surprise of 48.27%, on average. 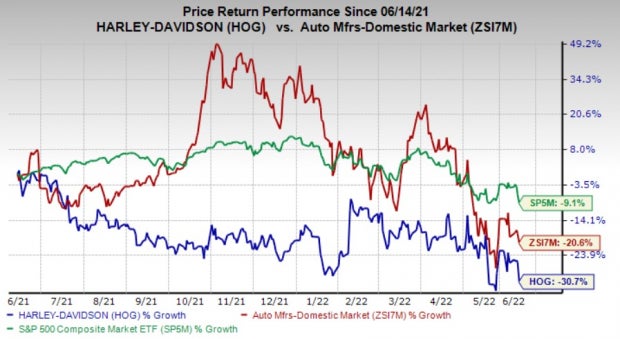 Over the past two months, the Zacks Consensus Estimate for earnings has decreased around 1.6% for the company. The consensus estimate for second-quarter 2022 has also been brought down 10.5% over the same time frame. The unfavorable estimate revisions keep investors at bay.

The Zacks Consensus Estimate for HOG’s 2022 earnings is currently pegged at $4.18, indicating a year-over-year decline of 0.24%. Earnings are also expected to register a 3.76% fall in the second quarter.

HOG is battling supply-chain disruption amid microchip shortage, which is resulting in the rise in commodity prices. Disruptions are expected to continue through 2022, translating to high raw material costs, which might clip gross margins. Unfavorable forex translations, a difficult labor market and increasing competition remain other headwinds. It doesn’t expect headwinds associated with logistics and parts availability to ease out in the near term. Moreover, the bleak outlook for the HDFS segment is concerning, with operating income from the unit predicted to decline 20-25% year over year for 2022.

The firm’s stretched balance sheet remains a cause of concern. As of Mar 31, 2022, the long-term debt totaled $4,470 million against cash and cash equivalents of $1,393.7 million a year ago. Long-term debt-to-capital ratio of the company is 0.64, higher than the industry’s 0.49. The high leverage, both in absolute and relative terms, restricts the firm’s ability to tap into growth opportunities.

The company’s rebranding strategy is likely to increase investments associated with product innovation and digital advancement, which will put a strain on the already weak financials of the company. The company expects capex in the band of $190-$220 million for 2022, higher than $120 million recorded in 2021.

Wabash National’s earnings beat the Zacks Consensus Estimate in three of the trailing four quarters and missed in one. WNC pulled off a trailing four-quarter earnings surprise of 51.26%, on average. The stock has declined 3% over the past year.

Fox Factory has an expected earnings growth rate of 14.9% for the current year. The Zacks Consensus Estimate for current-year earnings has been revised around 1% upward in the past 30 days.

Fox Factory’s earnings beat the Zacks Consensus Estimate in all the trailing four quarters. FOXF pulled off a trailing four-quarter earnings surprise of 10.18%, on average. The stock has declined 41.3% over the past year.

Standard Motor has an expected earnings growth rate of 5.2% for the current year. The Zacks Consensus Estimate for current-year earnings has been revised around 3.1% upward in the past 30 days.

Standard Motor’s earnings beat the Zacks Consensus Estimate in all the trailing four quarters. SMP pulled off a trailing four-quarter earnings surprise of 40.34%, on average. The stock has declined 9.1% over the past year.

T. Rowe Price's (TROW) May AUM Down 1.3% on Unfavorable Markets