Steel is central to any economy because of its consumption in a broad range of industries and its end use in practically every industry. A country’s overall development has been tied to the amount of steel it consumes. In fact, in the digital age, when semiconductors assumed a central role, many in the industry referred to semiconductor producing facilities as the steel mills of the future.

But while it has broad application across industries, the areas that use the maximum amount of steel remains construction, transportation (including light vehicles, trucks and other forms), machinery and implements, and defense.

Prices of the commodity have been on a roller coaster ride of late, as practically a number of the things that caused disruption in the broader market also impacted it. So initially, because of supply chain constraints, it experienced raw material sourcing issues that impacted supply, which in turn drove up prices. This was followed by the Ukraine war with the resultant pressure on pig iron supplies, with continued strength in prices.

The peak was in the beginning of May and prices and have been sliding since. But they are roughly where they were at the same time last year, which is a higher level than in 2019 and 2020 according to Trading Economics data. And there are other reasons for optimism:

The top consumers of steel are the construction and transportation industries, followed by machinery/implements, energy, defense, packaging, medical equipment and others.

So first, it’s worth remembering that construction demand remains strong. While new home production is constrained by the supply chain as well as labor, the situation has improved from before. There is tremendous underlying demand for affordable housing although the various drivers in this market have yet to play out.

Prices have got to come down a lot, as rising interest rates are pushing up mortgage rates, which are, in turn, driving up the total cost of acquiring a home. And prices won’t come down until home inventory increases notably.

Builders are constructing all they can. Non-residential construction also remains robust, with President Biden commemorating last month the six-month anniversary of the law passed to rebuild public infrastructure. The government has disbursed $110 billion under the law toward 4,300 specific projects identified for funding. These developments are very positive for raw material providers including steel producers.

Second, developments in the transportation market are both good and bad. On the good side, despite huge demand for light vehicles, the semiconductor shortage that hit the auto industry is not expected to normalize this year, which means that auto sales could be muted despite high demand.

But once more chips are available as expected in the second half of the year, production should bounce back, which should drive sales for steel companies as well. On the negative side, trucking capacity adds are likely to slow down this year, as supply chain issues ease and demand softens in response to rate hikes.

Third, machinery and implements remain in demand as both manufacturing and agricultural production remains strong. The latest ISM report is a good indication of the health of the manufacturing segment. The USDA has also provided an optimistic outlook for farm production on the back of strong demand and pricing stemming from shortages created by the Ukraine war, as well as the supply agreement with China.

Fourth, China is responsible for about half of the world’s steel production and also of its consumption. Therefore, slower growth and pandemic-related shutdowns in China are disruptive for the rest of the world. But China is also cutting back production in line with its carbon dioxide emission targets, which is a positive. After reducing by 30 million tonnes in 2021, it expects another reduction this year. First quarter production was already 10.5% lower than the prior year.

Given the above, and the fact that steel producing stocks are going really cheap right now, this could be the right time to build exposure: 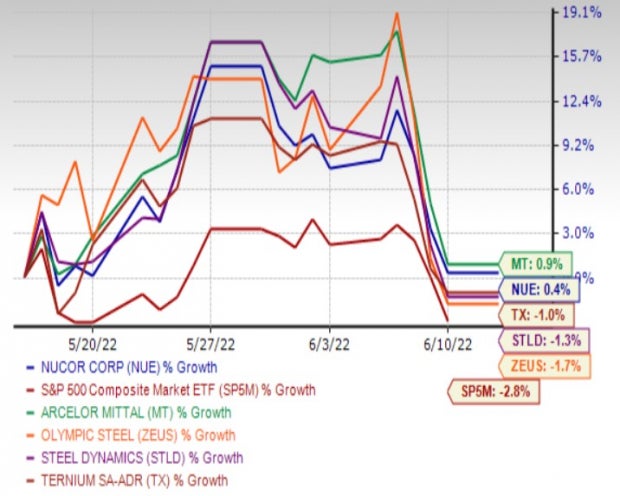