Accuray Incorporated (ARAY - Free Report) is well poised for growth in the coming quarters, backed by its solid global reach. A solid third-quarter fiscal 2022 performance, along with strong demand for its products, is expected to contribute further. However, overdependence on technologies and reimbursement uncertainties persist.

The renowned radiation oncology company has a market capitalization of $193.96 million. Accuray projects 155.6% growth for fiscal 2023, in which it expects to maintain its strong performance. The company surpassed the Zacks Consensus Estimate in two of the trailing four quarters, missed the same in one and broke even in the other, the average earnings surprise being 12.5%. 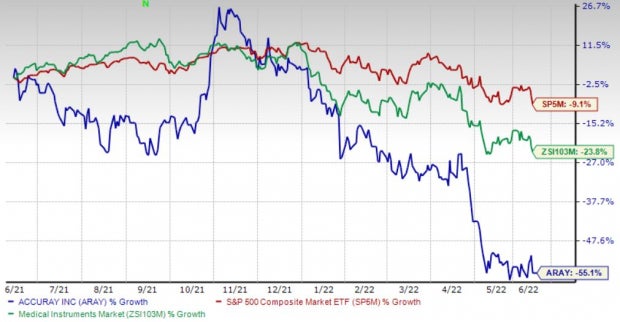 Global Reach: Accuray has been fortifying its foothold globally, thus raising our optimism. During the fiscal 2022 third-quarter earnings call in April, the company confirmed that it had sold its first CyberKnife S7 System in emerging markets like China and Kenya, where the majority of system orders were delivered to new radiation therapy customers.

During the fiscal third quarter, the Americas and APAC regions witnessed robust year-over-year order growth, with China being the major contributor.

Strong Product Demand: We are upbeat about Accuray’s products registering robust customer adoption over the past few months. During the fiscal 2022 third-quarter earnings call in April, the company confirmed that its top line reflected strong customer demand for ClearRT Helical kVCT Imaging for the Radixact System and VOLO Ultra enhancement to the Accuray Precision treatment planning system for the Radixact System and the CyberKnife S7 platform. The company also continued to witness robust customer demand for both CyberKnife S7 and Radixact TomoTherapy platforms as well.

During the same call, Accuray confirmed that the introduction of CyberKnife Neuro package with Brainlab Elements software at the Radiosurgery Society was completed in March.

Overdependence on Technologies: Consumer and third-party payor acceptance of the CyberKnife and TomoTherapy platforms as preferred methods of tumor treatment is crucial to Accuray’s continued success. Physicians will not begin to use or increase the use of the CyberKnife or TomoTherapy platforms unless they determine, based on experience, clinical data and other factors, that the two platforms are safe and effective alternatives to traditional treatment methods.

Reimbursement Uncertainties: Accuray’s customers rely significantly on reimbursement from public and private third-party payors for the CyberKnife and TomoTherapy platform procedures. The company’s ability to commercialize its products successfully and increase market acceptance of the same will significantly depend on the extent to which public and private third-party payors provide adequate coverage and reimbursement for procedures performed with Accuray’s products.

Accuray is witnessing a positive estimate revision trend for fiscal 2022. In the past 90 days, the Zacks Consensus Estimate for its loss per share has narrowed from 14 cents to a loss of 9 cents.

The Zacks Consensus Estimate for the company’s fourth-quarter fiscal 2022 revenues is pegged at $105.7 million, suggesting a 4.7% decline from the year-ago quarter’s reported number.

AMN Healthcare, carrying a Zacks Rank #2 (Buy) at present, has an estimated long-term growth rate of 1.1%. AMN’s earnings surpassed the Zacks Consensus Estimate in all the trailing four quarters, the average beat being 15.6%.

AMN Healthcare has gained 5% against the industry’s 66.6% fall in the past year.

HealthEquity, carrying a Zacks Rank #2 at present, has an estimated long-term growth rate of 20.3%. HQY’s earnings surpassed estimates in two of the trailing four quarters and missed the same in the other two, the average beat being 1.4%.

HealthEquity has lost 16.8% compared with the industry’s 66.6% fall over the past year.

Masimo, carrying a Zacks Rank #2 at present, has an earnings yield of 3.3% against the industry’s negative yield. MASI’s earnings surpassed estimates in the trailing four quarters, the average beat being 4.4%.

Here's Why Cadence (CDNS) is an Attractive Pick Right Now