Kronos Worldwide, Inc.’s (KRO - Free Report) shares have popped 25% over the past six months. The company has outperformed its industry’s decline of 6.1% over the same time frame. It has also topped the S&P 500’s roughly 16.5% decline over the same period.

Let’s take a look into the factors that are driving this a Zacks Rank #1 (Strong Buy) stock. 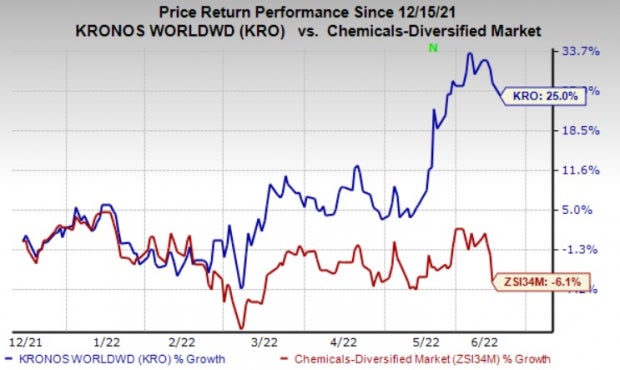 Forecast-topping earnings performance in the first quarter and upbeat prospects have contributed to the run-up in the company's shares. Kronos Worldwide’s first-quarter earnings of 50 cents per share topped the Zacks Consensus Estimate of 28 cents. It benefited from higher income from operations resulting from increased average titanium dioxide (TiO2) selling prices. Higher TiO2 selling prices and volumes also led to a 21% rise in the company’s top line.

The company, on its first-quarter call, said that it expects global demand for consumer products to remain strong through the balance of 2022. Based on strong demand, TiO2 selling prices are projected to increase through the balance of the year. Kronos Worldwide also expects its sales and income from operations for 2022 to be higher on a year-over-year basis.

Kronos Worldwide is expected to benefit from higher demand for TiO2. Higher demand in European and North American markets are likely to drive its TiO2 sales volumes. New product development, a solid customer base and effective marketing strategies are also working in the company’s favor.

Earnings estimates for Kronos Worldwide have also been going up over the past two months, reflecting analysts’ optimism. The Zacks Consensus Estimate for 2022 has increased around 60.9%. The consensus estimate for the second quarter of 2022 has also been revised 54.5% upward over the same time frame.

Nutrien, sporting a Zacks Rank #1, has an expected earnings growth rate of 175.4% for the current year. The Zacks Consensus Estimate for NTR's current-year earnings has been revised 31% upward over the last 60 days. You can see the complete list of today’s Zacks #1 Rank stocks here.

Nutrien beat the Zacks Consensus Estimate for earnings in three of the last four quarters while missed once. It has a trailing four-quarter earnings surprise of roughly 5.8%, on average. NTR has rallied roughly 34% in a year.

Albemarle has a projected earnings growth rate of 212.6% for the current year. The Zacks Consensus Estimate for ALB’s current-year earnings has been revised 106% upward in the past 60 days.

Albemarle’s earnings beat the Zacks Consensus Estimate in each of the trailing four quarters, the average being 22.5%. ALB has rallied roughly 34% in a year. The company flaunts a Zacks Rank #1.

Cabot’s earnings beat the Zacks Consensus Estimate in each of the trailing four quarters, the average being 16.2%. CBT has gained around 12% over a year.