Brown-Forman Corporation (BF.B - Free Report) and Coca-Cola (KO - Free Report) are giving people another reason to rejoice as they have collaborated to introduce the iconic Jack & Coke cocktail. The new ready-to-drink (RTD) pre-mixed cocktail will be made using Jack Daniel’s Tennessee Whiskey and Coca-Cola. The companies intend to launch the cocktail initially in Mexico and make it available in markets worldwide from late 2022.

Coca-Cola is currently diversifying its portfolio to tap into the rapidly growing RTD category. This marks its fourth new alcoholic drink in less than two years, thus strengthening its presence in the alcoholic beverage space. Notably, RTD has emerged as the fastest-growing alcohol segment since 2018 and is expected to rise 29% over the next three years, per IWSR Drinks Market Analysis.

Molson Coors is one of the largest brewers in the world and boasts a strong portfolio of well-established brands. TAP remains committed to growing its market share through innovation and premiumization. In first-quarter 2022, Molson Coors’ above-premium portfolio’s net sales grew more than 26% on a trailing 12-month basis. This growth was largely driven by the continued success of the U.S. hard seltzer portfolio, particularly the nationwide launch of Topo Chico Hard Seltzer, which is a key part of its “beyond beer” approach.

Constellation Brands is investing to fuel growth of its power brands through innovation, capitalizing on priority, consumer trends, and successful product introductions. STZ’s agreement with Coca-Cola to manufacture, market and distribute the new FRESCA Mixed cocktails in the United States bodes well. As part of the deal, Fresca mixed is likely to be launched this fall in vodka strips and tequila Paloma.

Coming to Brown-Forman, the company has already been a leader in the ready-to-drink category, driven by its Jack Daniel’s RTD. The latest move will allow it to market its products by well-known brands, thus, accelerating its expansion efforts. The canned cocktail is only for people of the legal drinking age and the packaging comes with trademarks of both Jack Daniel and Coca-Cola. BF.B also noted that a zero-sugar version of the beverage would be available.

For more than a decade, Jack Daniel's Tennessee Whiskey has been the key contributor of BF.B’s growth in the United States. The company’s investments in brands center around broadening the Jack Daniel’s family of brands, while exiting the weaker brands and expanding the fast-growing premium spirits categories. It has been investing in organically accelerating growth of two fast-growing spirits categories, bourbon and tequila. The balanced portfolio investments are supporting the company’s track record of consistent growth. 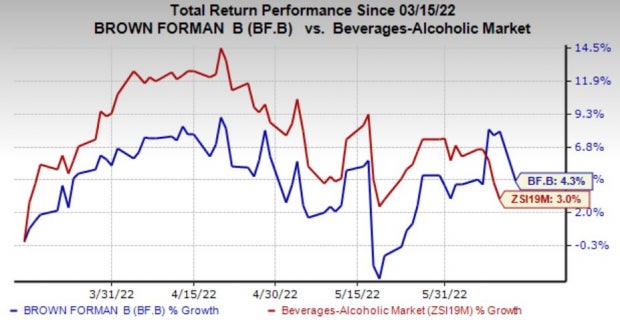 In the past three months, shares of Brown-Forman have gained 4.3% outperforming the industry’s growth of 3%. The company currently has a Zacks Rank #3 (Hold). You can see the complete list of today’s Zacks #1 Rank (Strong Buy) stocks here.

We believe that the growing popularity of ready-to-drink cocktails is showing no signs of slowing down anytime soon. As a result, spirit and beverage companies are not leaving any stone unturned to leverage the new trend.