Abercrombie & Fitch Co. (ANF - Free Report) announced its Always Forward Plan, which focuses on brand growth, leveraging its omni-channel capabilities, and expanding digital penetration and financial discipline. As part of this plan, the company provided a financial outlook for fiscal 2025 and a long-term view.

Coming to its second objective, ANF intends to accelerate its digital revolution via Knowing Their Customer Better and Wowing Them Everywhere initiatives. Also, increased investment in customer analytics in order to meet and outpace customer demand bodes well. Lastly, it plans to generate at least $600 million of free cash flow in the next three years to deliver good shareholder returns, and drive omni-channel growth across digital and stores.

What Else Should You Know?

Abercrombie has been gaining from continued strength in the Abercrombie & Fitch brand, which delivered better-than-expected sales. Meanwhile, Hollister’s sales were in line with expectations. This led to year-over-year sales growth of 4% for first-quarter fiscal 2022, marking the highest first-quarter sales since 2014. Also, average unit retail (AUR) improved for the eighth consecutive quarter in the fiscal first quarter, driven by the favorable response to its products and experience. AUR gains can also be attributed to reduced promotional activity and higher tickets.

The company remains on track with rationalizing its store base by reducing its dependence on underperforming tourist-driven locations. As part of its store-optimization plans, Abercrombie plans to reposition larger-format flagship locations to smaller omni-channel-enabled stores. In the fiscal first quarter, the company opened four stores, including three Hollister and one Abercrombie. It also closed five stores, all of which were Abercrombie stores.

In fiscal 2022, the company’s store plans will be focused primarily on store openings. It expects to open 60 stores in fiscal 2022 compared with the aforementioned 50 stores. The company expects most of these openings to occur in the back half of the year. It reiterated its target of closing 30 stores this year.

However, higher freight costs and increased operating expenses related to higher marketing expenses and the absence of last year’s COVID-related rent abatements and government assistance act as deterrents. Management expects higher costs to create a headwind, at least through the end of fiscal 2022. Also, the adverse impacts of foreign currency headwinds and inflationary pressures on consumer demand are likely to persist in fiscal 2022. 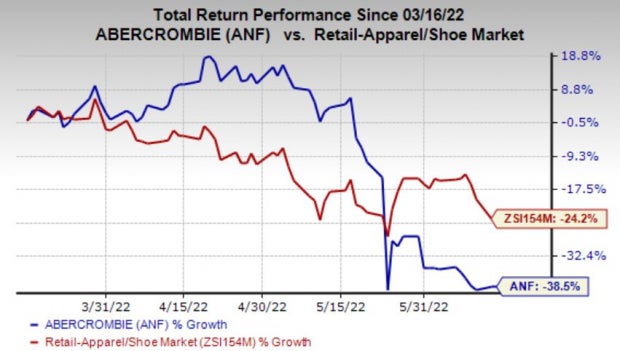 In the past three months, shares of this Zacks Rank #5 (Strong Sell) company plunged 38.5% compared with the industry’s decline of 24.2%.

LPL Financial (LPLA) May Metrics Up as Market Volatility Rises