Shares of Deciphera Pharmaceuticals, Inc. (DCPH - Free Report) have rallied 31.5% in the past three months against the industry’s decrease of 17%. 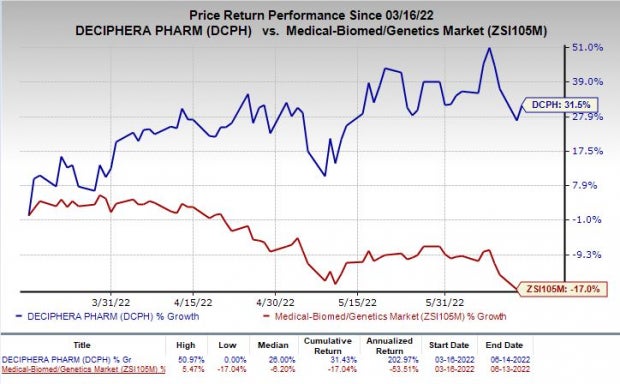 Deciphera's sole marketed drug, Qinlock (ripretinib), is approved for the treatment of adult patients with advanced gastrointestinal stromal tumor (“GIST”) who have received prior treatment with three or more kinase inhibitors, including Novartis’ Gleevec (imatinib). Qinlock has also been approved in Europe for the treatment of fourth-line GIST.

The company has made steady progress with Qinlock during this time frame, with the drug witnessing solid uptake so far. Qinlock contributes the majority of Deciphera’s revenues.

Deciphera is also working to expand the label of Qinlock for the larger commercial opportunity in GIST. A potential label expansion for other indications will make the drug eligible to treat a broader patient population and drive sales further in the days ahead.

In late November 2021, Deciphera entered into a corporate restructuring, whereby the company decided to streamline its commercial operations and reduce its current workforce by approximately 35% or almost 140 positions. The changes in the clinical development programs and restructuring efforts are expected to bring a significant reduction in the company’s operating expenses and extend the cash runway into 2024.

This apart, Deciphera has a diverse pipeline and is advancing multiple drug candidates in various stages of clinical development.

The company is evaluating vimseltinib in the phase III MOTION study for the treatment of tenosynovial giant-cell tumor.

A phase I study is evaluating DCC-3116 as a single agent and in combination with FDA-approved MEK inhibitors, trametinib and binimetinib as well as assotorasib, an FDA- approved KRASG12C inhibitor, for treating patients with various advanced/metastatic tumors, driven by mutations in RAS/RAF genes.

A successful development and potential approval of these candidates will be a big boost for the company.

Deciphera currently has no approved product in its portfolio other than Qinlock. All of its drug candidates, including vimseltinib and DCC-3116, are still some time away from commercialization. As a result, the company is heavily dependent on Qinlock for growth. Any regulatory setback for the drug will hurt the company’s prospects.

Earnings of Aeglea BioTherapeutics have surpassed estimates in two of the trailing four quarters and missed the same on the other two occasions. AGLE delivered an earnings surprise of 9.47%, on average.