With U.S. airlines grappling with pilot shortage, American Airlines (AAL - Free Report) has received encouraging tidings on the labor front, in the past week. Two regional carriers, Piedmont Airlines and Envoy Air, owned by AAL will hike the pay of their pilots by 50% through the August end. Latin American carrier Copa Holdings (CPA - Free Report) reported a decline in May traffic from the comparable period’s level in 2019.

With air fares moving north as airlines try to cover the increasing fuel expenses, European carrier Ryanair Holdings’ (RYAAY - Free Report) CEO expects ticket prices this summer to increase in the 7- 9% range from the pre-pandemic levels. An expansion update was also available from JetBlue Airways (JBLU - Free Report) in the past week.

1.Following the pay hike, hourly wages at Piedmont Airlines for first officers in their first year wil be increased to $90 an hour from $51. For first-year captains, pay will be raised to $146 an hour from $78.  Piedmont’s CEO said that the airline could even extend temporary hikes if needed. Piedmont’s pilots are moving to American Airlines’ mainline operations, leaving the carrier with a shortage of 25 pilots each month. Envoy Air reached a similar agreement with its pilots’ union to offer a 50% premium to pilots’ hourly rates through the end of August 2024. Envoy continues seeing about 80 of its pilots quitting every year to take up work in other airlines. The regional carrier has been hiring about 60 pilots a year for a while. On materialization, the increased remuneration will make the pilots of these two airlines the highest paid staff among the U.S. regional airlines.

2. Copa Holdings’ traffic, measured in revenue passenger miles (RPMs), declined 4.2% to 1.72 billion in May 2022 from the comparable period’s level in 2019. The downside was primarily due to coronavirus-induced lower air-travel demand than the pre-pandemic levels (2019). Due to tepid demand, capacity — measured in available seat miles (ASMs) — fell 3.7% from the 2019 level to 2 billion. With traffic declining more than the amount of capacity contraction, load factor (percentage of seats filled with passengers) deteriorated 40 basis points (bps) to 85.7% in May.

3. To cater to the increasing air-travel demand, JetBlue launched operations in Canada with daily nonstop flights from New York’s John F. Kennedy International Airport (JFK) to Vancouver International Airport. With international travel demand recovering, the service is expected to attract substantial traffic this summer. This expansion is part of JetBlue’s Northeast Alliance with American Airlines. JBLU is also expected to launch service to Vancouver from Boston, MA as part of this partnership. JBLU, currently carrying a Zacks Rank #3 (Hold), is operating this new Vancouver service on an Airbus A320 aircraft featuring more legroom in coach, free broadband internet, and complimentary snacks and soft drinks.

4. Per a Reuters report, Ryanair’s CEOMichael O'Leary said that with strengthening bookings, management expects summer fares to increase 7-9% from the pre-pandemic levels. O'Leary said that it expects load factor (percentage of seats filled by passengers) to nearly reach the pre-pandemic levels of around 94% in June. "And July, August, and September look very strong with higher load factors and also higher fares," he added. Ryanair expects airport management groups to "iron out" staffing crisis through recruitment to enhance travelers’ experience over the summer. 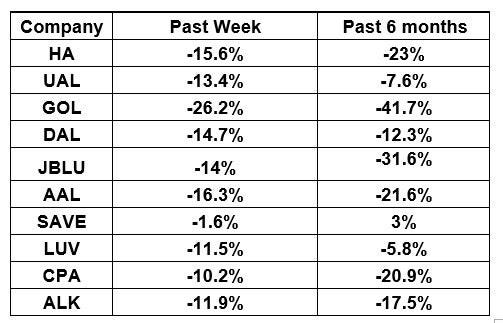 With air-travel demand increasing, more expansion-related updates from carriers may be available in the coming days.