Valued at $20.5 million, the contract is estimated to be completed by April 2023. Per the terms, Northrop will provide additional labor and material to incorporate production engineering change proposals for modifying MQ-4C Triton unmanned aircraft system production assets.

A major portion of the work related to this deal will be carried out in San Diego and Palmdale, CA.

Moreover, Triton’s autonomous operations are supported by land-based command and control mission planners and sensor operators. It also has a unique and robust mission sensor suite that excels in offering 360-degree coverage on all sensors, providing unprecedented maritime domain awareness for the U.S. Navy.

Built for the U.S. Navy, Triton is well-suited for any military missions, including maritime ISR patrol, signals intelligence, search and rescue and communications relay. Triton has the capability to fly more than 24 hours at a time at altitudes higher than 10 miles, with an operational range of 8,200 nautical miles.

Considering the underlying strength of Triton MQ-4C UAS amid the rising geopolitical tension, the demand for such jets is likely to be northward bound, which, in turn, will result in strong order inflow for NOC. The latest contract win is a testament to that.

The rising geopolitical tensions, globally, have resulted in countries fortifying their spending to reinforce their national defense systems. This has led to a huge demand for defense products. Consequently, there has been a surge in demand for effective and efficient UAS over the past few years due to its use in intelligence, surveillance and reconnaissance drives of military missions. Moreover, its remotely controlling features encourage a zero-mortality rate.

Per a Markets and Markets report, the military unmanned aircraft market is projected to expand at a CAGR of 16.4% during the 2021-2026 period. This should benefit Northrop Grumman and prominent defense majors like Lockheed Martin (LMT - Free Report) , L3Harris Technologies (LHX - Free Report) and Raytheon Technologies (RTX - Free Report) as they play a significant role in manufacturing UAS, which supports U.S. Army surveillance requirements.

Lockheed Martin has been delivering advanced autonomous systems to the U.S. military and its allies for demanding missions. Lockheed Martin provided a range of unmanned technologies, ranging from the X-44 Manta prototype, the Indago 3 unmanned drone and OUTRIDER.

Lockheed Martin’s long-term earnings growth rate stands at 5.7%. It has a four-quarter average earnings surprise of 63.25%.

The long-term growth rate of L3 Harris is pegged at 4.4%. It has a four-quarter average earnings surprise of 63.25%.

Raytheon’s Coyote UAS is small, expendable and tube-launched. It can be deployed from the ground, air or a ship. The Coyote UAS can be flown individually or netted together in swarms and it is adaptable for a variety of missions, including surveillance, electronic warfare and strikes.

The long-term growth rate of Raytheon is pegged at 10.5%. The Zacks Consensus Estimate of 2022 sales implies an improvement of 5.8% from the 2021 reported figure.

In the past year, shares of Northrop Grumman have surged 22.3% against the industry’s decline of 42.2%. 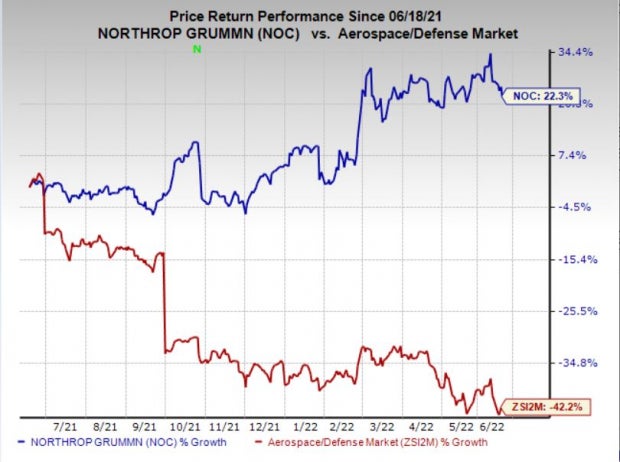