Valued at $866.6 million, this contract is projected to be completed by Dec 31, 2026. Per the terms, Raytheon will engage in the manufacture and assembly of Standard Missile-3 Block IIA All-Up Rounds.

The work related to the deal will be executed in Tucson, AZ and Huntsville, AL. The contract will cater to the U.S. government and Japan’s Ministry of Defense.

Raytheon Missiles & Defense (RMD) is a leading designer, developer, integrator producer and sustainer of integrated air and missile defense systems. This unit serves as the prime contractor or major subcontractor on numerous missile and related programs with the U.S. Department of Defense.

The SM-3 missile is a defensive weapon that the U.S. Navy uses to destroy short- to intermediate-range ballistic missiles. The flexibility of the SM-3 interceptor to be both land- and sea-based offers countries that do not have ballistic missile defense-enabled navies to take advantage of its incredible capacity to protect large areas of land.

In cooperation with Japan, Raytheon is currently developing the next-generation SM-3 Block IIA interceptor. It has two distinct new features: larger rocket motors that will allow it to defend broader areas from ballistic missile threats and a larger kinetic warhead. The kinetic warhead has been enhanced, improving the search, discrimination, acquisition and tracking functions, to address advanced and emerging threats.

So far, more than 400 interceptors have been delivered to the U.S. and Japan’s navy, which reflects the solid demand that Raytheon’s SM-3 missile enjoys worldwide. Considering this and the upgraded features of Block IIA, we expect the company to witness more inflow of contracts, involving production and associated upgrade of these missiles, like the latest one.

Per Mordor Intelligence, the missiles and missile defense systems market is estimated to register a CAGR of more than 10% between 2020 and 2025. The growing conflicts between various countries and the increasing number of investments in missile defense systems being made by nations are expected to drive the market, thereby creating solid growth opportunities for Raytheon, which is a prominent missile maker.

Northrop is a prominent developer of missile systems, and counter systems, including strategic deterrents, as well as subsystems and components. In fact, to strengthen its position in the missile market, Northrop acquired Orbital ATK in 2018, which used to be one of the industry leaders in providing missile components across air, sea, and land-based systems.

Northrop boasts a long-term earnings growth rate of 6.1%. The Zacks Consensus Estimate for 2022 sales implies an improvement of 2.6% from 2021’s reported figure.

Lockheed’s Missiles and Fire Control business unit develops, manufactures, and supports advanced combat missiles and rockets for military customers, including the U.S. Army, Navy, Air Force, Marine Corps, NASA and dozens of foreign allies. Some of its prominent products include the PAC-3 missile as well as the Terminal High Altitude Area Defense missile.

Lockheed boasts a long-term earnings growth rate of 5.7%. It has a four-quarter average earnings surprise of 63.25%.

General Dynamics boasts a long-term earnings growth rate of 9.8%. The Zacks Consensus Estimate for 2022 sales indicates an improvement of 2.7% from 2021’s reported figure.

In the past year, Raytheon Technologies’ shares have risen 4.2% against the industry’s 4.7% decline. 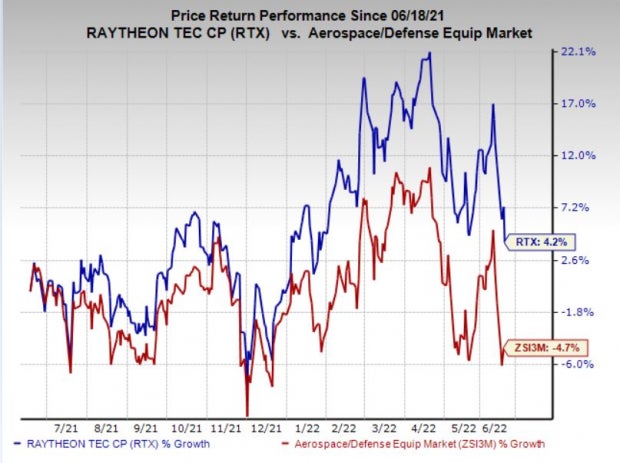 Should You Retain Selective Insurance (SIGI) Stock For Now?