With Germany having recently enhanced its defense spending by $112 billion following the ongoing conflict between Russia and Ukraine, we may expect more order flows for Teledyne from this nation, like the latest one.

The PackBot 525 is the most advanced model of Teledyne FLIR's signature ground robot. Its efficiency can be gauged from its multi-tasking abilities, ranging from bomb disposal, close-in surveillance and situations, involving hostages or hazardous materials.

Hence, such enhancements to an already efficient product are likely to witness a northbound demand as nations increase their defense spending to strengthen their defense structures.

Considering the wide applications of the UGV, its demand is poised to escalate going forward as it tends to smoothen military navigation and surveillance tasks and ease military missions significantly in hazardous situations. Per a report from Markets and Markets, the global UGV market is expected to witness a CAGR of 5.7% over the 2022-2027 period.

Such a potential growth enhancement opportunity in the UGV market is likely to usher in more contracts for TDY involving the PackBot 525, which is already an established military product in the global defense landscape. In this context, it is imperative to mention that Teledyne’s PackBot 525 already enjoys a lucrative position in the global military market, with 57 countries commissioning this rugged robot.

Northrop Grumman has a long-term earnings growth rate of 6.1%. NOC shares have appreciated 21.8% in the past year.

BAE Systems’ Ironclad has a unique set of capabilities for a UGV. Using high-endurance battery power, it offers near-silent running up to a 50 km range. A modular connection system allows two vehicles to be connected together to handle additional loads, such as a specialized stretcher. It is also protected against blasts and small arms fires to increase mission survivability.

BAE Systemsboasts a long-term earnings growth rate of 7.2%. BAESY stock has rallied 21.4% in the past year.

L3Harris T4 is a versatile, highly mobile UGV with the superior strength and all-terrain, all-weather performance to overcome any challenge.

L3Harris’ long-term earnings growth rate is pegged at 4.4%. LHX stock has appreciated 0.7% in the past year.

In the past year, shares of Teledyne Technologies have declined 17.2% compared with the industry’s fall of 9.8%. 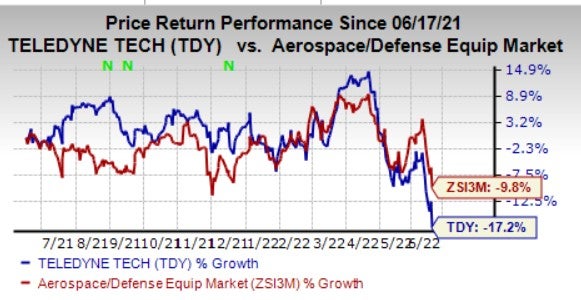