United States Steel Corporation (X - Free Report) announced the guidance for the second quarter of 2022. The steelmaker expects adjusted EBITDA for the quarter to be roughly $1.6 billion, setting a new all-time record for the second quarter. Second-quarter adjusted earnings per share are projected between $3.83 and $3.88.

U.S. Steel stated that it expects to continue delivering record performance in the second quarter, with each business segment significantly contributing to profitability. Its broad end market exposure keeps the business resilient with demand across a diverse customer base, including the resurging energy market. Its focus on strategic end markets and the continued realization of increased fixed price contracts are expected to deliver another quarter of record performance, the company noted.

The company projects the Flat-rolled segment’s adjusted EBITDA to be higher than the first quarter. Higher demand across its diverse customer base is expected to result in increased shipment volumes. The Mini Mill segment is anticipated to deliver adjusted EBITDA similar to the first quarter’s strong performance. Higher order activity is expected to be offset by lower average selling prices and increased metallics costs.

The European segment’s adjusted EBITDA is projected to get better than the first quarter’s performance. Increased input costs led by the Russia-Ukraine war are expected to be more than offset by higher steel selling prices in the region. The Tubular segment’s adjusted EBITDA is anticipated to rise on similar volumes compared to the first quarter. The division is expected to benefit from the resurgence in the energy markets and higher selling prices.

U.S. Steel bought back roughly $320 million worth of common stock quarter to date. As of Jun 16, 2022, there is around $210 million remaining under its $800 million stock repurchase authorization. 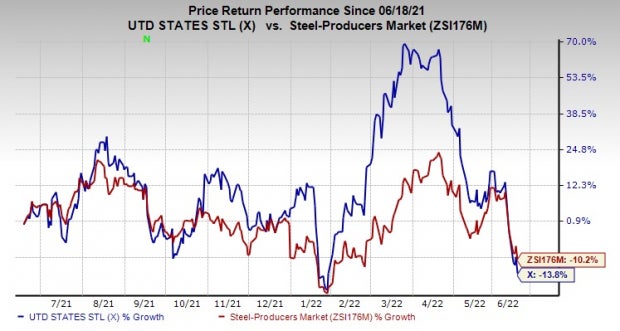 Allegheny has a projected earnings growth rate of 1,030.8% for the current year. The Zacks Consensus Estimate for ATI's current-year earnings has been revised 40% upward in the past 60 days.

Allegheny’s earnings beat the Zacks Consensus Estimate in the last four quarters. It has a trailing four-quarter earnings surprise of roughly 128.9%, on average. ATI has gained around 1% in a year and currently sports a Zacks Rank #1 (Strong Buy). You can see the complete list of today’s Zacks #1 Rank stocks here.

Cabot’s earnings beat the Zacks Consensus Estimate in each of the trailing four quarters, the average being 16.2%. CBT has gained around 5.8% over a year.

Nutrien’s earnings beat the Zacks Consensus Estimate in three of the trailing four quarters, the average being 5.8%. NTR has gained 43.8% in a year. The company flaunts a Zacks Rank #1.