Valued at $578.2 million, the contract is expected to get completed by March 2030. Per the terms, Lockheed will offer program management support, non-recurring unique requirements, and training for continued integration efforts on the F-35 fighter jet program.

The majority of work related to this deal will be performed in Fort Worth, TX. The deal will serve the Foreign Military Sales (FMS).

The recent tiff between Russia and Ukraine led to nations increasing their defense spending on military equipment and arsenals. Military aircraft with multi-mission capabilities are an integral part of any efficient defense system.

Lockheed Martin enjoys a dominant position in the global military aircraft space, given its strong F-35 fleet. This stealth aircraft boasts features that make it an ideal choice for many nations. Moreover, LMT’s constant efforts to modernize and upgrade the aircraft with advanced technologies and enhance its capabilities to meet the current warfare needs boost demand significantly.

The F-35 program remained the largest revenue generator for Lockheed Martin’s Aeronautics business unit and accounted for 68% of Aeronautics’ net sales in 2021.

The stealth aircraft is expected to witness a continued upswing in its demand as the U.S. government’s current inventory objective is pegged at 2,456 aircraft for the U.S. Air Force. The company anticipates delivering 148 to 153 aircraft in 2022 while expecting deliveries to grow to 156 aircraft in 2023 and beyond.

Due to F-35’s remarkable features, which are well-suited for any military mission, Lockheed Martin continues to witness a steady inflow of orders involving the jet. The latest contract win is a testament to that. This, in turn, should bolster LMT’s revenues from the military aircraft arena.

Since its inception, Northrop Grumman has been a pioneer in the development of manned aircraft. From fighter jets and stealth bombers to surveillance and electronic warfare, Northrop Grumman has been providing manned solutions for customers worldwide. It has built some of the world’s most-advanced aircraft, ranging from the innovative B-2 Spirit stealth bomber to the game-changing E-2D Advanced Hawkeye.

Northrop Grumman has a long-term earnings growth rate of 6.1%. The Zacks Consensus Estimate for NOC’s 2022 sales indicates an improvement of 2.6% from 2021’s reported figure.

In the past year, shares of Lockheed Martin have rallied 5.6% against the industry’s decline of 44.5%. 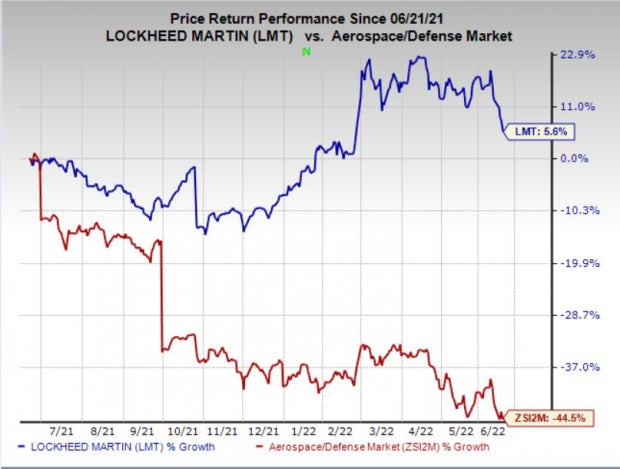